Kodak, Fuji, face off at KMart

– So we fuelled up the vehicle for the first time in two months, removed the coat-hanger from the aerial socket to avoid the attention of fussy highway patrol persons, and it was up the Geelong Road to finally check out the duelling test sites that Kodak Alaris and Fujifilm have running in various K-Mart store around Melbourne.

First we described the wide arc around the Melbourne CBD which is the Western Ring Road, to arrive at the Greenborough Plaza shopping mall at around 11am, making a beeline for KMart and finding the photo counter tucked away in the right hand back corner.

It appears that KMart doesn’t want this trial to be supported by much in the way of branding, as the kiosks have basically been plonked down where the HP kiosks used to be. The slightly Las Vegas-ey Fujifilm kiosks, with their pinstripe varicoloured neon trim, make a bit of a statement (and certainly appeal to one’s Inner Magpie) but that’s about it. Not one but two Fujifilm DL650s behind the counter look like they mean business.

And talking of business, I noted to the friendly middle-aged lady sales assistant that it was a bit quiet. ‘Not really,’ she replied. (The ‘you idiot’ was unspoken but inferred.) While the (eight?) kiosks were vacant, at least one of those 650s was knocking out prints at a furious rate, and she informed me they were still printing orders from earlier that morning. So no, not quiet.

(This was underscored when we arrived later to pick up our order. Since we’d left, the Greensborough chapter of the Perambulator Enthusiasts’ Society had moved in and all the eight kiosks were occupied. So anything but quiet.)

But now to our own market test: First disappointment was that our intended trial of the Fujifilm Transpix app for downloading images from a smartphone was immediately knocked on the head due to there being no Android version. Unforgiveable. Apparently Transpix does support Android via a wireless access point (I Googled it) but I don’t think that was available at KMart. If it was it was being kept secret. (Late-breaking news is that TransPix does have a downloadable app for Android phones on the Google store – they’ve just kind of kept it to themselves. See comment below from Fujifilm’s Daniel Paul.)

But the kiosk quickly accepted our microSD card and the ordering process was straightforward. Print prices were 10 cents for next day pick up,15 cents for same day pick up and 20 cents for ‘Express’, and this formula was applied though the product range. Kmart/Fujifilm were offering a full range of printing from 6×4 through to posters and canvas prints and photo books. Even in-house photo books. The printing device for these was not on show, but the sample I was shown looked like something off a colour laser printer. I didn’t see a wide -format printer, though. Still something photo specialists can do which might challenge the generalists.

An unprepossessing notice sticky-taped behind the kiosks informed customers that Express doesn’t mean Instant, and there would be a wait of at least 30 minutes for Express prints. We placed the order and wandered off. Having provided a mobile phone number, we were to be SMSed when the order was ready…Which was about 10 or 15 minutes later. Impressive.

In the meantime we popped into Ted’s Cameras, where lo and behold! there was another couple of those neon-trimmed Fujifilm kiosks on the counter. They had very recently been installed, we were told. So away we went again. Basically the same software, but there were a few more options, such as the choice whether to auto correct or not. I think the software in KMart made that decision for you – of course you do. And Ted’s staff had thoughtfully supplied a dongle to download from iPhones, in addition to the TransPix App.

A friendly fellow helped me with my order. He helped me a lot. There are things, fundamentally nice things, which happen to man which tell you that the top half of the hourglass is beginning to run out of sand. One of those is being offered a seat by schoolchildren on public transport. Another is being whisked through a kiosk print order by a helpful assistant. My mistake was to just be a bit hesitant on the ‘bordered or borderless’ option. ‘No one has bordered prints these days,’ he informed me (kindly withholding the ‘old timer’ from the end of the sentence.) Then in a flurry of touch-screening in which I played only a cameo role, my order was on its way to the printer.

– Which wasn’t a DL650 but something about the size of a breadbox behind the counter, loaded with a roll of 4-inch inkjet paper.

A fat, apparently deceased HP thingamajig sat wasting space where a proper photo printer could have been.

The prints were once again 20 cents and I was first asked whether I wanted to come back next day to pick up the order. My crest must have fallen, because without me saying anything it wasn’t long before this had been re-negotiated by the equally friendly younger woman manning the breadbox. Ascertaining there were just a few prints involved, she asked me to come back in about ten minutes. Cool.

I noted that Ted’s was as quiet as KMart, but having been spurned once, held my own counsel this time. And when I returned to pick up the order one staff member was busy printing, while another was taking a passport pic, while the third was demonstrating a camera. That was more like it – there’s life in the photo specialty channel yet!

Then it was down to Richmond, where KMart had the rival Kodak system installed. That is, an APEX printer and four or five yellow kiosks. The blue-hued wall display indicated that HP had once been here.

A younger man of a mincing disposition, who I understood to be the resident sales assistant for the KMart Richmond photo department, was doing something on the next kiosk. I noted that KMart used to have HP kiosks and he agreed, non-commitally. I probed a bit further, asking him whether he thought the Kodak printing was better quality. He said it was all different ‘… the software, the inks, everything.’ He had either been instructed not to offer an opinion (this being a market test and all) – or had an opinion which it wouldn’t be apropriate to express.

The Kodak ‘installation’ was even more half-bottomed that the Fujifilm. A sign sticky-tapped to the wall behind this bank of kiosks told customers that there would be no posters, canvas prints or prints beyond 8×10 ‘until further notice’. With a hand-drawn Sad Face to soften the message.

We were the only customers in sight. 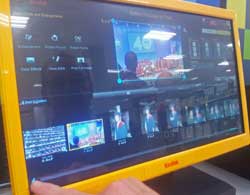 While I was ordering prints from my microSD card once again (which it took three or four attempts for the Kodak kiosk to accept) my young colleague had downloaded the Kodak App for smartphone – Kodak has an Android version – and had placed an order himself. Too easy!

And the 20 cent prints were really and truly ‘Express’ this time. The printer was fired up (the photo department was genuinely quiet) and before you could say ‘condescending hipster’ the prints were in the no-name print wallet and the print wallet in my hands. And we were off.

As we were leaving, my colleague said something which should provoke mixed feelings in the photo industry: ‘Now that I know how easy that is, I’ll be getting more prints like that.’

– While the reaction is just what we want from the smartphone wielding yoof of Australia, isn’t it a little shameful that knowledge of the ability to print from phones, and the ease and speed with which prints can be made, isn’t a little more widespread? PMA – there’s a valuable role for you here. And how lame is it that Fujifilm’s system doesn’t talk to Android smartphones?

So – overall impressions? Print quality was OK in all three outlets but Kodak dye-sub came in a clear third. Skin tones were OK, but it totally lost it reproducing an image with challenging lighting. The gloss is not glossy enough and in high-contrast images the bright parts have this ghost-like diffusion about them.

However, in images shot outdoors in 1/125 sec/f5.6 sort of conditions Kodak’s dye-sub prints are much the same as the inkjet prints from Fujifilm. (It would have been clever to have a silver halide set of prints made to compare both alternatives to.)

It pains me to say it, but the Fujifilm prints from the KMart DL 650 were noticeably better than the prints from the Fujifilm breadbox from Ted’s. Could have been due to the automatic auto correction or the printer. But it’s just wrong for a Kmart to be offering better quality printing than a photo specialist outlet virtually next door. In print quality, Ted’s is letting the side down. People go to photo specialists expecting exceptional, rather than acceptable, quality, and ever since the switch to HP, that hasn’t really been the case in our premier photo chain, in my opinion. I understand Epson and Noritsu have some impressive dry printers…

But the staff in the Ted’s store were by far the most likeable and knowledgeable, and the store had a warm and friendly ambience as a result. On the other hand, the lady in the KMart Greensborough store knew her stuff and I imagine would have related well to her usual clientele. The chap in Richmond handed me back the keys I had mistakenly left at the kiosk.

Software? Meh – it’s all fine. Slightly different approaches but overall pretty simple. We’ve been doing this for around 10 years now, so it damned well should be. Kodak takes the cigar for handling Android.

Unless there’s a big difference in the financials, or KMart has a greater concern for print quality than one would assume, you would have to assume Kodak has an edge in winning the contract. Otherwise, KMart will just be doing a Me-Too running against Big W, which is also adopting the DL650 solution.

The third alternative is that KMart drops photo from its categories altogether. Wishful thinking? Most probably. That KMart Greensborough installation was doing business.