PMA is depending on member and exhibitor support and a comprehensive, mainly ‘below-the-line’ social media campaign to get the word out about its Educational Photo Expos in Brisbane (August 23) and Melbourne (September 6).

Press releases have been sent to 160 print, radio, TV and online media outlets, including What”s On websites in Brisbane and Melbourne, while the event is being promoted on PMA’s Twitter and Facebook sites, via Google Adwords, and on the websites of exhibitors.

Ted’s Camera has been a notable supporter, with the Photo Expo featured on Ted’s Camera homepage and an in-store poster promotion.

Last week PMA Australia events organiser Barbara Bryan put flyers out to PMA members supported by a press release – the third in a series – tying the Photo Expo event in to Fathers Day. PMA is using a press release distribution service to get the message out.

With the Brisbane event a little over a week off, ticket sales are on target, according to Barbara, with over 130 out of a goal of 200 already sold. 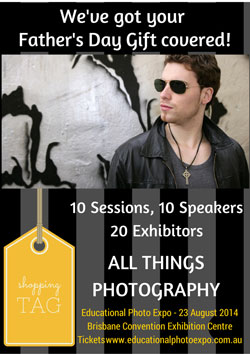 ‘The recent Father’s Day marketing had a great response on social media and we have 75 people booking sessions, with the most popular being the Canon Collective and Peter Eastway doing travel photobooks on behalf of Momento,’ she said.

‘In Brisbane, the audience is coming from PMA marketing, Ted’s Cameras, Momento and camera clubs, and we are hoping that the other retailers will bring a surge of bookings over the next week!’

Melbourne sales haven’t been as brisk, but with the event on September 6 there’s still some time to build attendance.

Barbara has put out an ‘all outlets’ request for support to get ticket sales over the line in both cities. Displaying promotional flyers in your Victorian or Queensland store will help. To access a range of PDFs of flyers and programs contact Barbara Bryan: Bbryan@pmai.org