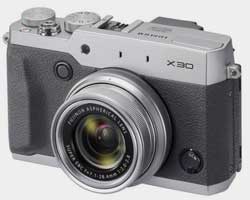 The 2.36 million-dot organic EL viewfinder incorporates a dedicated lens that improves visibility by automatically controlling the viewfinder’s brightness according to the ambient light levels. The Live View display can also be set to reflect shooting conditions, or offer a natural view close to what is seen with the naked eye, while the viewfinder’s eye sensor automatically switches the visible information when the camera is positioned vertically or horizontally.

The Fujifilm X30’s f2-2.8 4x lens is made up of 11 glass elements in nine groups, including three aspherical lens elements and two ED lens elements. Additionally, the X30’s lens incorporates seven diaphragm blades ‘for stunningly soft ‘bokeh’ to make your subject stand out from the background’.

The X30 has an optical 4x manual zoom lens and an image stabilization mechanism that shifts five lens elements to compensate for camera shake by up to four stops. Fujifilm clains the image stabilisation system effectively prevents motion blur while stopping vignetting and loss of image resolution that usually results from shake compensation.

There are two rings on the lens: a manual zoom ring and control ring. The control ring is positioned behind the manual zoom control and allows the immediate change of aperture and shutter speed settings while fine-tuning image composition. Functions such as ISO sensitivity, film simulation, white balance and continuous shooting can be assigned by pushing the control ring setting button at the front. Two top-plate dials and six function buttons positioned on the back of the body also offer faster access to regularly-used features for a more instinctive operation.