Maintenance and spare parts support for HP RPS photo printing equipment in Australia and New Zealand will be guaranteed through to at least October 2015 via NZ-based  technology service contractor, Visual Group. 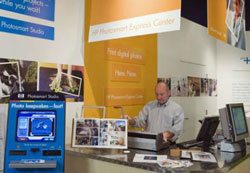 AWA and Visual Group were both contracted by HP to handle RPS service contracts, with the Ted’s Cameras and Kmart work with AWA and the bulk of independent specialists with Visual Group. Kmart will have switched over to its newly contracted photo retailing partner, Kodak Alaris, by March or April next year, leaving Visual Group to make an offer to the lion’s share of the remaining installed base.

HP has agreed to supply Visual Group with spare parts to provide 12-months support, but on a tight deadline. As a consequence, the service contractor will be keen to know its likely customer base before placing that order.

Likewise, Photo Direct has also committed to continue to supply consummables until October next year, but will need to know the number of its continuing customers and their needs so it can stockpile HP product.

Several HP RPS components such as the LJ9500 colour laser printer, the B9180 A3+ inkjet printer and the 24-inch Design Jet DJ130 have already been discontinued.

According to Photo Direct’s Steuart Meers, there are around 100 independents with at least some HP equipment installed who will need to decide whether to continue on with HP equipment or move on to another solution.

He said in discussions between HP RPS customers and Photo Direct so far, around half were contemplating continuing on with the equipment for another 12 months and the other half were inclined towards investing in an alternative.

HP entered the dry minilab business with a flourish in 2009. It had the first full system which integrated fast inkjet printing with other printing mediums such as colour laser and wide-format, book-finishing accessories and easy-to-use kiosk software.

HP formally announced its decision to abandon its Retail Publishing Solutions (RPS) business in August last year, indicating at the time it would provide a further 12 months notification before withdrawing spare parts and consumables availability.