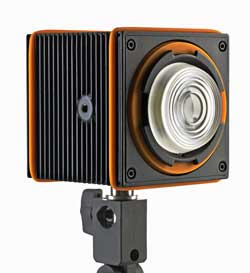 The LED Light Cube is a world-first lighting technology for both photographers and digital filmmakers. It was developed from scratch in just over two years by Melbourne company IC12, with crowd-sourced funding via Indiegogo.

Due to the LED Light Cube using an LED rather than a filament, the Cube can double as a video light as well as a flash, which is particularly handy given the trend towards DSLR cameras shooting digital video.

Using super-bright LEDs, the Light Cube not only emits a high quality light, but there is no recycle time between flashes.

‘No matter how high you may make your power settings, the Cube can fire remorselessly, holding up alongside state-of-the-art cameras shooting at high-speed bursts of 15 frames per second,’ explained IC12’s Nathan Oxley. ‘For wedding and sports photographers, this means never missing an “I do” or winning moment.

Despite its compact size, the LED Light Cube offers photographers the kind of control over the output of light only previously possible with high-end studio lights.

The Light Cube incorporates lithium ion polymer battery technology for the highest possible battery performance in a compact size. Not only is it small, but it dispenses with the need for external battery packs.

The crowdsource-funded prototype was unveiled in August 2013 where approximately 200 backers pledged funds to support the initial manufacture.

‘From a technology view, a lot of companies are producing versions of the same product just to compete in the marketplace. We don’t want to create a product that is a version of something else. What we’re doing is unique, improving and building on what’s out there. The LED Light Cube brings real value to photographers, offering them more opportunity in the way they work,’ said Mr Oxley.

‘The LED Light Cube has been created in direct response to the restrictions faced by today’s photographers, videographers and filmmakers. We believe that we have the answer to many of the issues the plague image makers today. No recycle time, better control over light output, no external battery packs and more flexibility.

‘We wanted to create a light that offers the versatility that imagemakers require, which means there’s no need to have different lights for different purposes anymore.’

The LED Light Cube will be on demonstration by Australian Fashion Photographer of the Year, Peter Coulson, during his Australian and New Zealand roadshow, sponsored by CR Kennedy.