Canon Australia will sack almost 10 percent of its Australian staff following a dramatic downturn in profit (before income tax) in its 2013 financial year from $38.6 million (2012) to just $4.1 million.

The story of the sackings was broken by Nic White on trusted print industry website, ProPrint, and confirmed by a Canon spokeswoman.

Canon will outsource some of the roles covered by approximately 100 staff in ‘administration and back-office support jobs’ to business process management firms Genpact and Convergys, and is reported as saying the restructure will ‘streamline its office operations to increase efficiencies and better serve its customers’.

It’s also reported the cuts will be mainly from the head office in North Ryde. Canon has 980 Australian staff, according to the ProPrint report.

The consolidated group had a bottom line (net profit after tax) result of $7.5 million on total revenue of $756,451 million. This was a profit increase on the 2012 result. Canon Australia (with which most businesses in the photographic sector deal) had a net profit of $3.6 million after paying $561K in income tax.

Revenue for Canon Australia was down from $722 million in 2012 to $670 million in 2013, the $52 million drop perhaps partially a reflection of the collapse of the digital compact market, in which Canon enjoyed a massive market share. A closer look at the figures, however, shows that revenue from Sale of Goods dropped less than $20 million – or a little more than 3 percent. Given 2013 was a dreadful year for camera sales, this is a fairly good result. 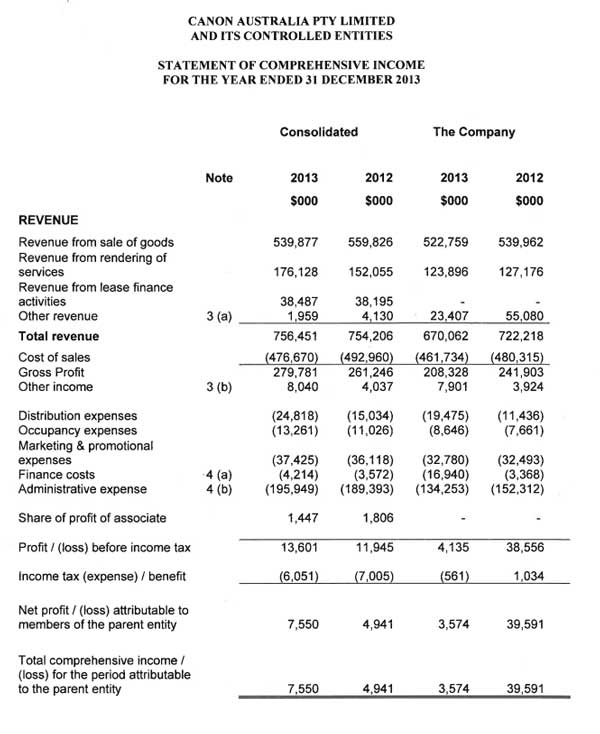