Camera market grows as it shrinks

The production of cameras – in devices from smartphones and tablets to motor vehicles – is set to grow by 12 percent to 2017, while standalone camera production falls by 10 percent over the same period, according to a report from integrated circuit industry website, IC Insights. 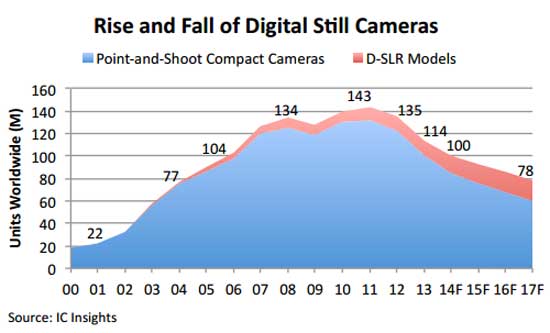 The decline in compact digital still camera shipments accelerated in 2013, according to the report, causing suppliers (except perhaps for GoPro) to reduce the number of models being sold and to focus on interchangeable lens models.

‘Sales of DSLR models are still growing but not by enough to keep the camera business from shrinking,’ the report noted. ‘Total digital still camera (DSC) shipments peaked in 2011 at 143 million units. Worldwide DSC shipments are expected to fall by a compound annual growth rate (CAGR) of -10 percent between 2012 and 2017 compared to an annual average growth rate of just 1 percent in the 2007-2012 period and nearly 31 percent per year in the 2002-2007 timeframe.’

‘…Cellular phones continue to be a major growth application for digital cameras and imaging, but IC Insights predicts high growth rates for several other embedded applications this decade including automotive, tablets & PCs, security & surveillance, and medical/scientific/industrial, which will open high-volume market opportunities for image sensor suppliers and IC makers in the near future.

Integrated circuit sales for stand-alone digital cameras are projected to decline at an annual average rate of -10.5 percent in the forecast period, while revenues for integrated circuits used in automotive camera systems are expected to surge by a CAGR of 113.3 percent between 2012 and 2017. Sales of ICs for tablet and PC cameras are forecast to rise by a CAGR of 20.2 percent while cellphone camera integrated circuits are expected to rise by an annual rate of 9.0 percent in the 2012-17 period.

Given that consumers can print from their cameras, smartphones and tablets, most of this growth is potentially positive for photo retailers. The following chart shows that the lion’s share of camera growth is in products consumers can easily print from: 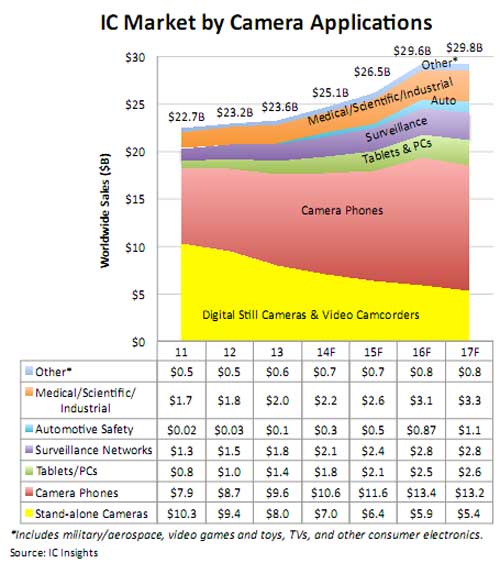