The newly-released Apple iPhone 6 and iPhone 6 Plus come with some enhancements to what Apple describes as he ‘world’s most popular camera’, but keep the same 8-megapixel resolution as the previous model. 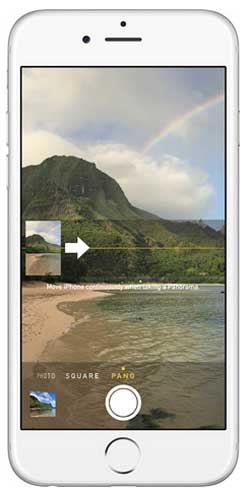 While it’s still just 8 megapixels, the sensor has been improved, with its 1.5 micron pixels matching many digital compact cameras. It uses phase detect pixels for faster autofocus – Apple says twice as fast as the iPhone 5s. Contrast, detail and sharpness have also been improved, as have face, smile and blink detection. HDR shooting has been added. The lens has an f2.2 aperture and five elements.

Exposure adjustment of up to four stops is via a slider on the preview pane, and panoramas of up to 43 megapixels can be captured in Pano mode.

Selfies can be captured in bursts of 10 frames per second with the 1.2-megapixel FaceTime HD front-facing camera, which also boasts an f2.2 aperture and ‘now captures over 80 percent more light with a new sensor.’

Besides the larger screen size (5.5-inches versus 4.7 inches), the iPhone 6 Plus features optical image stabilisation, the ordinary old 6 doesn’t.

Apple is tempting sticker shock with its pricing, especially as the trend is to lower-priced smartphones and away from plans. The next few months will tell whether it has finally overestimated its potential customers’ willingness to overpay for its products. Mobile technology pundit house Telsyte had these comments about the pricing strategy:

‘In today’s world of sub-$300 smartphones, the biggest challenge might be Apple’s local pricing. Of the new iPhone 6 configurations only the iPhone 6 16GB comes in below $999. This might impact demand, particularly for outright purchases (ie, not on contract or a payments plan). Apple might be creating a new ‘luxury’ category – or maybe ‘ultra-premium’ – given it is going against overall industry downward pricing trends.

‘High purchase prices also increase the importance of contracts and MRO payment plans, likely to be a key strategy of the carriers to lure customers, amongst other incentives.