The popular Olympus OM-D Micro Four-Thirds line-up has been expanded with the release of the E-M10 in late February at a $1000 price point, and Olympus has also announced a tweaked Olympus OM-D E-M5 in a ‘Pro Kit’ version. 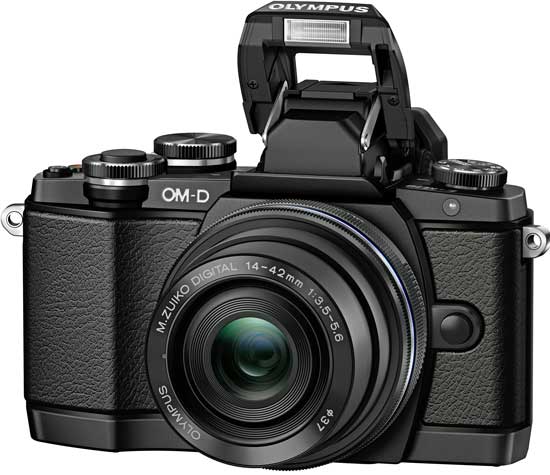 Marginally smaller than the E-M5, the new camera has the same 16-megapixel Live MOS sensor but comes with the TruPic VII image processor from the E-M1. Unlike its siblings, the E-M10’s metal body is not weather-sealed and its memory card slot is located in the same chamber as the rechargeable lithium-ion battery. When matched with the M.Zuiko Digital ED 14-42mm EZ kit lens, the total thickness of camera and lens is a mere 64mm – around 2 inches in the old currency.

The new camera retains many of the features of the E-M5, including a similar control layout, with two metal control dials that have a solid, responsive feel, a 3-inch tilting TFT colour LCD with approximately 1.04 million dots and the same high-resolution EVF.

Special accessories for the new camera include a detachable grip, which provides additional depth to the camera body to make it more comfortable to hold for users with larger hands. Olympus is also offering a soft camera case which can hold the E-M10 with 14-42mm EZ lens attached. It has five-layer construction with inner storage pockets for lens caps and other small items, with a 50mm wide belt loop plus loops for securing the camera strap to the case.

For a comprehensive and Australian-exclusive ‘First Look’ review of the Olympus E-M10, courtesy of enthusiast website Photo Review, click here. 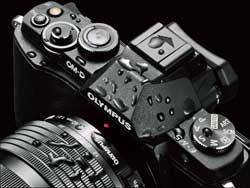 New lenses announced
Olympus also revealed three new lenses for its Micro Four Thirds line-up, which will be available in March:
– The M.Zuiko Digital ED 14-42mm f3.5-5.6 EZ electronic zoom len is the company’s most compact standard 3x zoom lens to date. Designed to suit both OM-D and PEN cameras, it in just 22.5mm thick and weighs only 93 grams. It is equipped with a 2-step variable speed zoom function driven by changing the rotation angle of the zoom ring. The zoom and focusing rings are located around the entire circumference of the lens for easy manual focusing no matter how the camera is held. Closest shooting distance is 20cm at the wide angle position and 25cm at telephoto. Avaiable in black and silver at an RRP of $499;
– The M.Zuiko Digital 25mm f1.8 prime lens is an ideal all-rounder for everyday snapshots, street photography, portraits and landscapes. The wide maximum aperture provides scope for shooting with de-focused backgrounds as well as minimising camera shake when shooting in low light levels. This lens is one of Olympus’s ‘Premium’ series.
Close focusing is from 25cm from subjects, providing a magnification factor of 0.24x. The M.Zuiko Digital 25mm f1.8 will be offered in black and silver at an RRP of $499.
– Fish Eye Body Cap Lens BCL-0980, which offers a focal length of 9mm and fixed f8 aperture. Only 12.8 mm thick, this accessory features a 5 element, 4 group construction of glass lenses and includes two aspherical lenses. It covers a 140-degree field of view. A multi-use lens barrier MF lever lets users switch from pan focus shooting to close-up 20 cm shooting with a single touch. Expected RRP $139.
– Special thanks to Margaret Brown, Photo Review Australia, for assistance in preparing this report.