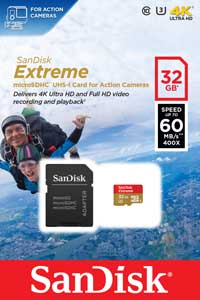 The new cards are waterproof, shockproof, and X-ray proof, and are capable of operating in temperatures ranging from -25 – 85 degrees Celsius.

The Extreme range has a UHS Speed Class 3 (U3) rating and offers up to 60MB/s read speed and up to 40MB/s write speed – fast enough to support recording of both Full HD and 4K Ultra HD action video clips. Users can quickly transfer files to computers for storage or to suitably-equipped smart devices for sharing.