GoPro has announced a 4K upgrade to its range, as well as a $169 budget model, with local availability probably towards the end of October.

Top of the new range is the GoPro Hero4 Black, which captures 4K/30fpsvideo and 8.3 megapixel stills from video. In continuous burst stills mode, it can capture what GoPro describes as ‘magazine quality’ 12-megapixel digital files at 30 frames per second, although it’s not stated how long it can sustain this for.

The GoPro Hero3 Silver also offers 12-megapixel stills but lower resolution video. In addition it has a touch screen – a feature missing from the top-of-the-line model.

Both models offer:
– Manual control of colour, sharpness, ISO and exposure in both photo and video mode;
– Night Photo and Night Lapse modes;
– HiLight Tag to mark key moments with the push of an on-camera button while recording;
– QuikCapture: When enabled, a single press starts video capture, while a press and hold engages Time Lapse photo capture.
– Improved audio. GoPro claims the new models have twice the dynamic range of previous models. 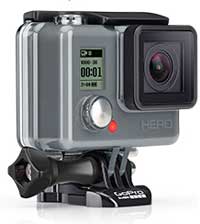 New accessories announced simultaneously include:
– Smart Remote enabling remote control from up to 183m away;
– A compact floating handgrip;
– A new and improved Battery ‘BacPac’ for twice the battery power of the camera’s internal battery alone.

NOTE: There seems to be some uncertainty about local RRPs. Other websites are quoting the Black model at $679, the Silver at $499 and the basic Hero at $129. It’s interesting to note that GoPro has a US-based online store which offers the range at GST-free prices, undercutting its local distribution network.