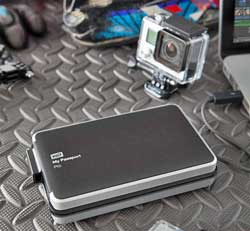 It consists of two 2.5-inch hard drives housed in a sleek aluminum case.

For Mac systems, My Passport Pro has user-selectable RAID functionality to deliver dependable performance in the field, without the need for power adapters or extra cables. My Passport Pro is available in 2TB and 4TB capacities.

WD is making much of the fact the new drive is ‘Thunderbolt-powered’, and thus delivers faster transfer rates. It is directly powered via the integrated Thunderbolt cable and delivers speeds of up to 233 MB/s. Another key feature of the dual-drive My Passport Pro is its user-selectable RAID function, which lets users choose data striping (RAID 0) for speed, or mirroring (RAID 1) for data redundancy, depending on the user’s needs.

Thunderbolt technology is superior to both FireWire 800 and USB 3.0 (not to mention sounding much more impressive). For video, it has the ability to copy a 22GB high-definition video file in half the time typically required by a USB 3.0 drive working in RAID 0 format.

WD says the My Passport Pro is thoroughly shock-tested for extra durability to perform reliably when working on the go.