SanDisk has announced a 128GB SanDisk Ultra microSDXC UHS-I memory card (long name for such a tiny product!), which it says is the world’s largest-capacity microSD card. 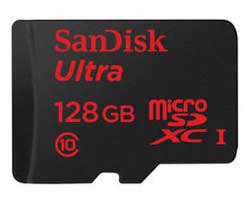 The 128GB SanDisk Ultra microSDXC card is now available in-stores around Australia with an ERP – which is apparently an estimated RRP – of $199.00.

But wait – that’s not all!
SanDisk has also announced a new version of the SanDisk Memory Zone app which lets users easily view, access, and back up all their files from their smartphone’s memory. As a part of the SanDisk Memory Zone app, SanDisk is releasing OptiMem, a new feature that allows Android users to enhance their smartphone’s internal memory by automatically transferring some of their old photos and videos to their microSD card.

OptiMem will continuously monitor the user’s mobile device memory levels, and inform them whenever the internal memory falls below a pre-defined threshold.