One of the recent success stories of the Australian and New Zealand photo industries has been Independent Photo Supplies (IPS) which clocked up 10 years’ trading in 2013. 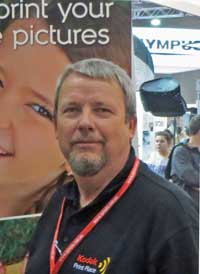 Over the past decade founders Stuart Holmes and Rob Voysey and the IPS team have built the business into an operation in which all the eggs are not in the same basket.

‘We have a nicely spread business now, so that it’s not dependent on one market or another or one season or another…So at the moment we are in schools labs season – they are kicking in and going very well,’ said IPS managing director, Stuart Holmes. ‘Pro labs are all on board…Retail was a bit flat coming off the back of Christmas but there’s probably a bit of a bounce coming back because we are heading towards that lovely niche part of the cycle.

Because the business goes across the prolab, professional photographer, schools photography and retail photo specialist segments, most customers are probably unaware just how ‘nicely spread’ the business is.

Capuccinno quotes
Mr Holmes sees photo retailing in 2014 and beyond as fundamentally a niche activity, and as such retailers should be seeking to command a premium.

‘I’ve never seen anybody walk into a coffee shop and ask for a quote on a cappuccino, likewise a loaf of bread from a hot bread shop,’ he explained. ‘You go to those expert niche marketers when you want something different. You go to Coles and Woolworths if you want a loaf of bread that’s in a plain polythene bag.

‘Maybe there’s no longer 3000 minilabs across Australia but the ones that are out there – they are the ones serving the $5 cappuccinos, if you take my analogy.’

But what about the mass merchants’ 10 cent print campaigns – don’t they undermine that niche positioning? Not so much these days, according to Mr Holmes.

‘You know what? I think the cycle has changed significantly and whatever has happened in the way of cheap prints has had the desired effect, but I think it’s now meaningless.

‘As I read it – not to put Fuji down in the way they’ve marketed their product – I think the strategy was to encourage printing by making it cheap. Probably on the upside I think it killed home printing stone dead – anybody who thought they could do it better and cheaper through a home printer rather than a silver halide lab no longer has those aspirations.

‘I think the difference now is that 5 cent prints, 8 cent prints have no currency in the consumers’ eye any more. Now it’s all about ‘Can you do it? And when can I have it?’

‘I think it’s run its course. I don’t know whether it’s had the desired effect for Fuji or not but frankly those days are gone.

‘Consumers are looking for something different. Australians are aspirational – we all want something better. Look at all the exotic cars on the road. Local manufacturing failed to grasp the attention of the consumers. People want something a little more bespoke, a little more interesting, and it’s the same in photography.

‘And photography is the idea medium to do this, with the range of gifting, photobooks, the ability to produce trendy interesting products – Instagram, panoramic printing double-sided printing. To be able to order it any where any time.

‘Everybody has a camera on their hip. Photography has gone ubiquitous. This is what people were promising 10 years ago and now it’s happened. I think the difference is that now with a much smaller, more niche industry, it will keep evolving.

‘The supermarket brand’
– And of course IPS and its customers have another ace up the sleeve in terms of differentiating themselves from Harveys and Big W – they don’t use the same paper as most of the 10-cent prints are made on. Moreover, as well as maintaining a premium brand positioning for its paper (more or less by default – Kodak has not been so closely associated with the commodification of photo prints) Kodak continues to launch improved silver halide papers and (if statements from Fuji and Kodak spokespeople at last year’s PMA conventions are any guide) just seems more committed to the silver halide business.

‘I think that Kodak has stated categorically that they have a long-term vision supplying the products, and that’s proven by the fact that right in the middle of Chapter 11 they introduced Kodak Premier Endura. Their flagship paper Kodak Supra Endura was replaced by a newer, high technology product.

‘Here we are now in 2014 with the new Premier pro paper, which will be embraced by the volume users.

‘We have a customer who tells us the only reason he is in business is because he is dealing with IPS and we put him on to Kodak Professional Brilliance paper. He has Harvey Normans and Big Ws all around him and all sorts of competition, and he simply turns over the print and says “this is the product the professionals use – that’s why I use it. They [the competition] use the supermarket brand”.’

He noted that Fujifilm Crystal Archive paper was launched in 1999 along with Frontier minilab technology. .

‘That was good, but that was then – that’s 15 years ago now. There’s an impression out there that this (Frontiers minilabs and Crystal Archive paper) is new technology, but it’s not. It was a sea change back then. Dry printing with high quality dry materials is the new sea change.

‘People are staggered when we reproduce difficult images on a Noritsu dry lab. Invariably the results are more saturated, with better sharpness, better shadow detail more highlight detail and overall punch. So things have changed.

‘As revolutionary as Frontier was in 1999 we are at that point again. Having said that, if you hang on to your wet lab with new Kodak products coming out then again you are getting that lift – not hanging on to the same product we had in 1999.’

‘I think with dry labs it’s probably a matter of when, not if – but it depends on what it is. The product we’ve been involved with, the Noritsu dry lab – it’s provable that the gamut is every bit as large and in some areas a bit larger than silver halide, so the ability to reproduce colours is there and so is the ease of operation, the lack of chemistry, the OH&S aspects, the carriage of dangerous goods – everything is getting more OH&S sensitive.

‘Having said that, in my opinion silver halide is still king. It still offers the absolute pinnacle of reproduction and quality, and all other products are compared to it.’ And it’s cheap, too!

‘Silver halide has had all R&D costs washed out of it. It’s cheaper than it ever was. I was interested to read in Photo Counter recently that people thought the Kodak distributor in Australia and the grey marketers still operating had put up the cost of materials.

‘I would challenge that – Kodak photographic paper has never been as reasonably priced as it is now. Kodak was never a cheap paper, we all know that. Kodak had a position in the market that it defended to the hilt, but the price of products has been coming down significantly. Things have never been better placed for an industry to re-invent itself.’

But while silver halide and inkjet photo printing represent the present and the future, digital presses, according to Mr Holmes are more problematic for printing photographs.

‘How near is the ‘near photographic quality’ which these dry presses and Indigo presses put out?’ he asked. ‘ There’s a lot of “Emperor’s New Clothes” going on here. It’s not photographic quality and it can be proven. It doesn’t have the gamut that Endura has – nowhere near it – it’s highly expensive and it’s designed for a short-run digital printing environment.

And the ‘near photographic quality’ is not even as close as it could be, because of the use of cheap paper stock: ‘Everyone has chosen to use some pretty ordinary print stock that’s exceptionally cheap in value and in its appearance.

‘Kodak and others have designed high-tech coated papers to go through Indigos and their competitors – Kodak Nexpress for that matter – which turn out quite a respectable result. It’s still not photographic – but a lot better . But there seems to be some dichotomy between people prepared to spend a million dollars on a digital press yet not prepared to spend 25 cents on a sheet of A3 paper to run through it. So by spending seven cents a sheet they deliver their customers TV Week’ quality printing. That I don’t understand.

‘If you are prepared to spend $1 million on a press surely to spend, say, 12 cents on an A4 sheet would not seem to be a big ask.

Next stop was Macau, where IPS officially launched Dakis to the Camera House members at the half-yearly meeting and updated them on developments at IPI.

In May IPS will be running a photo retailers’ roadshow in Australian capital cities.