GoPro appears to be attempting to enforce a global retail price maintenance regime among retailers, taking action against big HK-based eBay discounter Digital Rev for misuse of GoPro images and its logo. 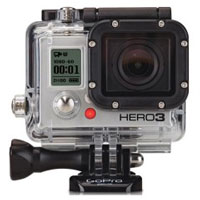 GoPro claims that Digital Rev is selling GoPro products ‘illegally’ because it is not an authorised reseller. Consequently it issued a DMCA (US Digital Millenium Copyright Act) take-down notice against Digital Rev’s website host, which was complied with within 24 hours.

Digital Rev continues to sell GoPro products, but without running the GoPro logo or official product photography. (Presumably they will eventually take their own photos!)

The real issue here is not misuse of some press photos (which actually accompanied a favourable comparative review of the GoPro Hero 3 versus the Sony Actioncam) but Digital Rev not being ‘authorised’, and thus free to undercut what is a pretty tight band of price differentials GoPro has established around the world. The Hero 3 Black for instance is US$399 on the B&H site and $469 (incl GST) from DCW, $465 (incl GST) from Cameras Direct.

GoPro has employed MarkMonitor, a Reuters company, to track use of its logo and images around the world and go after non-authorised use or mis-use.

As one retailer we spoke to said, ‘Gopro is like Apple… big-headed and a god unto themselves’. The comparison is a valid one – GoPro is (currently) to actioncams what Apple is (currently) to smartphones and tablets. As such it is able to demand more ‘discipline’ from retailers than most brands.

Locally, the effort to control price is via the authorised supply chain. There are two aspects to GoPro’s price control:
1. Low margins to retailers, which takes away their wriggle room on price;
2. Withdrawal of supply to retailers who sell below RRP.

In a finessing of the low-margin tactic, GoPro in Australia has variable wholesale price lists depending on the channel with which it is dealing. So for instance, photo retailers are on an 18 percent margin with one local GoPro distributor, while surf shops are on 28 – 30 percent, on the reasoning that photo retailers are more likely to negotiate with customers on price, and better equipped to sell cameras.

The demand that retailers don’t sell at lower than GoPros’ RRP appears to contravene Section 48 of the Australian Competition and Consumer Act, but nonetheless is contained in at least one GoPro distributors’ Dealer Application form:
[The distributor] shall be entitled to cancel orders and terminate this agreement where the Dealer attends to the advertisement or resale of any goods provided under this agreement at retail sales price less than value established by the RRP list from time to time.

The dealer application also demands that retailers seek approval from GoPro for the retail addresses and website URLs GoPro products are sold from.