Sony is running an ‘Accessorise’ promotion, directing customers who purchase low-margin cameras from Sony-supporting retailers to its own online store for purchase of high-margin accessories. 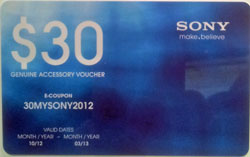 The Accessorise promotion (artwork at end of this story), is for a $30 discount on a matching camera case, a ‘value packed kit’, or a spare battery. It appears Sony has not informed retailers they are delivering it to customers to whom they have made a sale of a Sony camera.

Sony argues that few retailers stock genuine Sony accessories, and this is simply an exercise in reaching consumers who would otherwise not be aware they are available.

The promotion is not across all Sony camera models, but only those which for various reasons need to be re-packaged for the Australian market.

The discounted promotional product can only be obtained from the Sony Australia Online Store and by registering as a MySony member, enabling Sony to capture its retail customers’ customers’ details.

The furious retailer who forwarded the promotional material to Photo Counter explained: ‘We happened to find this packed within a Sony [Cyber-Shot] HX-30 box that we were selling to a customer.

‘Sony never mentioned a word about it to us and needless to say – we are ecstatic!  NOT!!!

‘We feel a little betrayed … I wonder about others?’

Retailers increasingly depend on accessory sales to boost profitability, with little margin available in the depressed and highly competitive digital compact market.

Sony seems to have attempted to defy gravity in marketing communications terms – running a consumer promotion while not informing a key group of stakeholders – namely its retail partners.

There is no reference to the Accessorise promotion on the dedicated Sony Promotions web page – http://www.sony.com.au/section/promotions – which publicises another seven current Sony cashback and bonus promotions.

Nor is the Sony Accessorise promotion featured on the active and busy Sony Facebook page.

The promotion ends on March 31 and apparently commenced in October last year.

Since posting this story, Photo Counter has received responses from Sony Australia to several questions we asked. On behalf of readers, we thank Sony for its cooperation:

What Sony cameras does the ‘Accessorise’ promotion cover?
– Various Cyber-shot and Handycam models which are reworked locally have this promotional offer inserted

Why has Sony chosen to direct existing customers of its supporting retail outlets to the Sony online store instead of perhaps offering the $30 accessory discount in-store as value from the retailer?
– Genuine Sony accessories are not ranged widely in every retailer. This promotional offer gives Sony customers a chance to purchase genuine Sony accessories online and experience the accessory world of Sony more widely.

While retailers of course have the opportunity to sell accessories at the time of sale, this offer gives consumers the chance to experience other accessories not ranged by the retail environment and/or learn more about their product via the MySony program.

Is the “Accessorise” promotion in all new Sony camera packaging, or only that going to certain channels or retail customers?
The offer is not retailer specific. 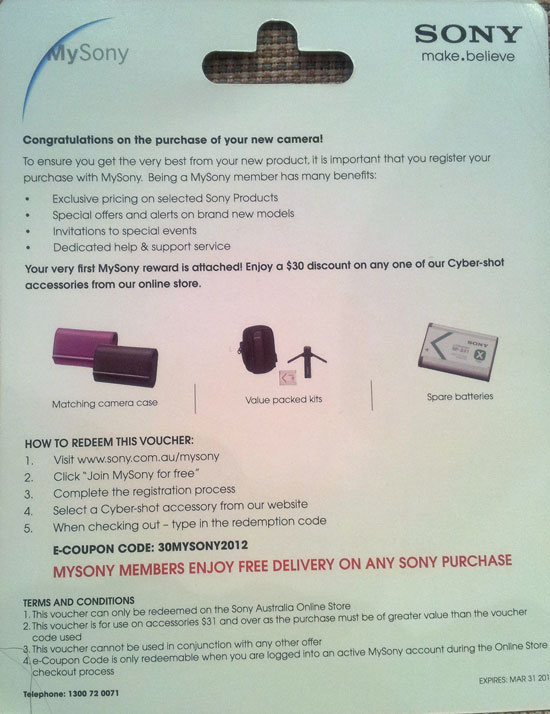