Sony has announced two unique ‘lens cameras’ which attach to an Android smartphone for high resolution stills and HD video. 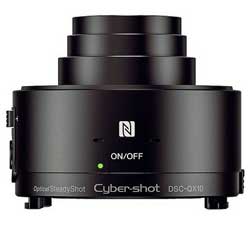 The QX100 and QX10 attach with a supplied smartphone attachment that fits several popular smartphone models (width 54-75mm, maximum thickness 13mm). Connection to the phone is made via Wi-Fi and the latest version of Sony’s PlayMemories Mobile app. Wi-Fi pairing is even simpler for NFC smartphones, with easy one-touch connection.

The smartphone’s touch screen is the viewfinder and controls the shutter, movie recordings and adjusts settings like shooting mode, zoom and autofocus area.

Users don’t even need to attach the camera to the phone – smartphones can be used as a wireless remote control unit. 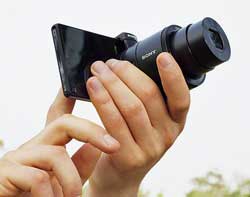 Superior Auto helps get the best from any scene, while the QX100 also sports a dedicated control ring for camera-like adjustment of manual focus and zoom.

Accessory options include a soft carrying case and dedicated camera attachment case for a perfect fit with latest Sony smartphones and unspecified other maker smartphone models. 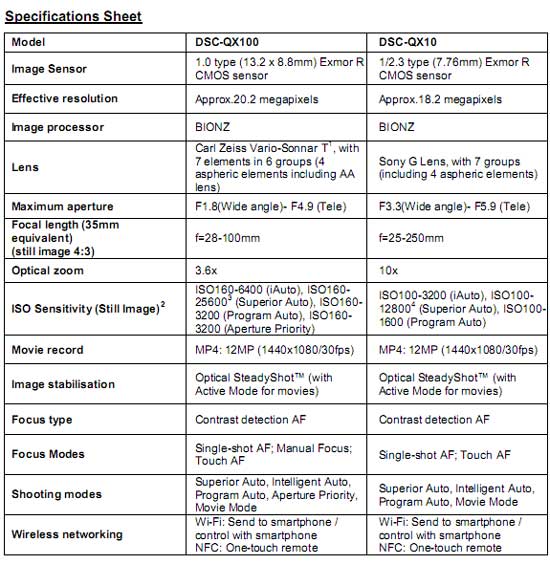 COMMENT: At last – real innovation from a Japanese camera company! At IFA, Sony announced this all-new concept and a major upgrade to its GoPro alternative ActionCam. There are rumours of more out-of-the-box products to come from Sony, which seems determined to exploit its strengths as a sensor manufacturer. Competitors Canon and Nikon certainly don’t have anything comparable to these ‘lens cameras’ and haven’t even bothered with the actioncam segment. Their mirrorless camera efforts have been half-arsed as they try to protects their DSLR business. They need to watch out they don’t jointly or severally ‘do a Kodak’ in wrestling with disruptive technology.