Immediately prior to the CP+ show in Yokohama, emerging as the platform for photo companies to announce their enthusiast and professional products, Olympus has announced a new metal-bodied Stylus XZ-10 compact, and an updated 75-300mm Micro Four Thirds lens. 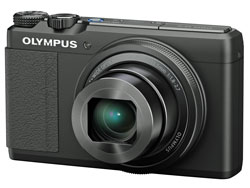 The XZ-10 introduces some new features to please family photographers, including a new ‘Photo Story’ direct-montage function that enables users to compile a collection of related pictures that tells a story of a special occasion or event as a single frame. This mode displays montage templates on the LCD screen with picture ‘frames’ that users can shoot directly into by tapping on the frame containing the composed picture. The image is then saved when all frames are filled.

FlashAir card (from Toshiba) support enables wireless transfer of photographs to social media sites through smart-phones and tablets, via an Olympus app.

As is regrettably all too common in Australia, local pricing details have not been revealed, although the camera is scheduled for release in March. 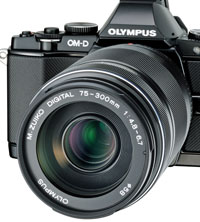 Olympus has also announced an update to the Micro Four Thirds M Zuiko 75-300mm telephoto zoom lens, with a re-styled exterior to suit the OM-D camera.

The new version is slightly lighter than its predecessor. It has 18 elements in 13 groups including a Super ED (Extra-low Dispersion) lens element, and two ED lenses to eliminate chromatic aberrations, plus three HR (High-refractive) lenses to maintain a compact physical size and further reduce optical aberrations. ZERO Coating (Zuiko Extra-Low Reflection Optical Coating) on all glass surfaces minimises the effects of flare and ghosting.

The Olympus MSC (Movie & Still Compatible) lens drive system is used to provide very fast and silent autofocusing as well as smooth AF tracking for movie recording. The internal focusing lens elements are driven directly by a metallic shaft and feed screw, which are engineered to submicrometric accuracies.
The new lens can focus to 90cm at the 150mm setting or 1.5 metres at 300mm. It weighs 423 grams and is under 12cm closed.

Scheduled for release in March, the price has yet to be revealed.