Lot to like from Leica…Print@Fujicolor no more…Fujifilm, Fred Hollows see eye to eye… 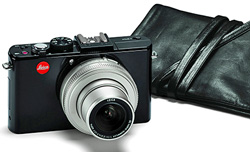 Leica will add a new take on the Leica D-Lux 6, a new 45mm f2.8 lens for SD-System cameras and accessories to its range in the lead-up to Christmas.

The new D-Lux 6 features a high-gloss, two-colour finish with a silver lens and black body. RRP is $1050. A Leica wrap-around soft pouch in lambskin nappa leather has also been announced for the D-Lux 6.

The Leica S medium format system gains a new lens in the form of the Elmarit-S 45mm f2.8 ASPH. Its focal length is equivalent to a 35mm lens in full frame DSLR format. RRP is $8000, with an integrated central shutter version at $9500.

Leica also adds Leica Traveller carbon tripods to the range, along with two 24/38 ball heads and a set of three quick-change plates for use with the ball heads. The tripod has an RRP of $700, the Leica Ball Heads 24/38 have RRPS of $320 and $550 and 3x set exchangeable mounting plates are $60.

Photos saved at the site will no longer be accessible from that date, and any orders need to be placed by New years Eve.

Fujifilm will continue to operate its www.fujifilmphotos.com.au site, offering photo printing along with a wide range of photo gifting products including canvas and calendars.

During November and December 2013, the calendar will be available for redemption with the purchase of a Fujifilm X100S digital camera from participating retailers, with $25 donated to the Fred Hollows Foundation for every X100S sold.