Jeff Moorfoot and his merry band of Ballarat International Foto Bienalle volunteers have had a rare win in the funding stakes, having been awarded $40,000 per year for three years from 2014/15 by Arts Victoria.

‘For five editions of the festival we have walked the financial knife edge, always waiting on confirmation of funding round results to see if we had the necessary dollars in the bank to stage the next festival,’  the BIFB explained in its regular newsletter.

Although the month-long 2013 Biennale was the largest and best so far, it was marred by a lack of support from major businesses in the photo industry. The funding from Arts Victoria removes some of the uncertainty around the BIFB’s continued survival in the absence of industry support.

The BIFB board and sponsorship manager, Kylie Stillman, were singled out for establishing fiscal and governance frameworks to give funding bodies the confidence that ‘the BIFB is an organisation that has, and will continue, to grow and forge new and exciting paths for Australian photography.’

Alex Cearns began her photographic career in 2006 and since then she has won more than 50 awards for her pet and wildlife photography, including Australia’s Best Canine Photographer, 2011 and 2013 – not to be sniffed at. She was rated among the top portrait photographers of 2012 according to Capture magazine.

‘To photograph animals I need fast, sharp, reliable lenses. I can’t afford to miss that all important shot of a dog doing a high five or of a kitten leaping,’ said Ms Cearns. I was keen to find the best lens fit for subjects who don’t always sit still and discovered Tamron in early 2013. Their super performance range was just what I had been looking for. The lenses perform every time I press the shutter button and I can visibly see the difference in the depth of colour and unmatched sharpness in my images.’

Smartphones not smart for image storage
One of the downsides of always having a camera at hand is the increased chance of it slipping out of your hand!

A UK poll of 2000 consumers has found that 36 percent of people have lost ‘precious picture memories’ – 28 percent losing images after dropping and damaging their phones.

The survey was conducted by photo printer SnapBox as part of a PR campaign aiming at encouraging people to have their image files printed as well as uploading them to social networking sites.

The survey found that 28 percent of 18-24-year-olds store most of their images on sites such as Facebook and Instagram. Nineteen percent don’t display images at home ‘as they feel they have too many photos to choose from’.

Almost a third of British consumers admit they upload photos to social media platforms while on holiday, rather than waiting until they get home.

Silver is back!
There’s a big new kid on the block when it comes to high quality digital printing, and it uses silver halide paper to deliver results which apparently make the HP Indigo look a bit ordinary. (Though some might argue that is damning with feint praise!)

The LumeJet S200 from the UK is the first printer to be manufactured by Coventry-based firm,LumeJet. It carries a list price of around 150,000 pounds and combines digital printing with silver halide-based media using an inkless, LED-based system that ‘prints’ light in dots that are four microns across. (So far it’s sounding suspiciously like a big digital  minilab.)

LumeJet claims that the machine can output the equivalent of 4000dpi inkjet quality because it gives the same continuous-tone result as traditional analog photographic printing. The LumeJet can also print sharp text to 1-point size.

According to LumeJet, the S200 takes 305 mm photographic roll paper for page sizes up to A3 landscape double-page spread, full bleed, including trim (1000 x 305mm maximum) – ‘ideal for layflat books’.

But with no details provided on prints speeds, media, etc, it’s hard to discern how the LumeJet S200 is anything more than a large format RA printer. 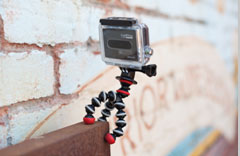 The GPod Mini Magnetic is a mini-tripod with magnetic feet for securing to all types of metallic objects. It’s designed for point-and-shoot and action cameras, such as the GoPro range. An adjustable neck allows users to change the position of their camera angle for more creative possibilities and the flexible leg joints adapt to uneven surfaces.

The MPod Mini Stand features a universal design that fits most smartphones, with or without their protective cases (accommodating sizes up to a Samsung Galaxy Note). The mini tripod is built with flexible leg joints that adapt to all types of surfaces and its expandable head mount clamps a smart phone in place.