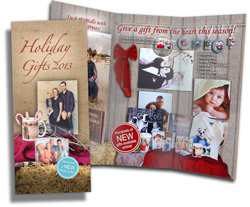 LifePics is providing retailers with marketing support items to help boost sales across the next few months. Print-your-own marketing materials are now available to retailers through the LifePics admin system and include a range of eye-catching items, including tri-fold brochures.

For example the Holiday Card flyer is a customisable tri-fold to which retailers can easily add their URL and logo, then print as many two-sided, colour flyers as needed. The brochures can be folded and used to promote either in-store products, ship-to-home or both.

Foto Riesel will open the doors of its new premises at 360 Kent Street, Sydney for a free night of ‘retro photo fun’ next week.

The ‘Retro Revolution’ event will take place on Thursday, December 5, from 6-9pm and include a series of educational talks and workshops highlighting the ‘beautiful and individualistic nature’ of film photography. The store will offer specials on printing and processing, film and processing products, plastic and medium-format cameras, old school cameras and accessories. Spot prizes will be given on the night. For further information visit www.fotoriesel.net.au or call (02) 9299 6745.

The DJI Phantom Quadcopter with GoPro Mount is a remote controlled, four-propeller quadcopter with a removable GoPro camera mount for capturing POV footage of flight.

‘For the first time ever, DJI brings professional-level multirotor flight control tech to the average person!’ states The New Camera House website. ‘Come and see how for $699 you can get into the world of aerial filming with your GoPro.’

Entry is free but via registration. When we checked this morning (Nov 28) there were only 16 tickets left.

The ruling upheld three previous discrimination rulings against Elane Photography of Albuquerque. The studio’s owner, Elane Huguenin, was held liable for discrimination in 2008 by the New New Mexico Human Rights Commission (NMHRC) for refusing to photograph the commitment ceremony of plaintiff Vanessa Willock. Huguenin first appealed the ruling first to a New Mexico District Court, and then to the New Mexico Court of Appeals. Both courts upheld the NMHRC ruling.

The judge in the state Supreme Court hearing said that all wedding-related businesses – including florists and caterers – are also barred from discriminating against same-sex couples in New Mexico.

The judge reasoned that the photographer had freely chosen to be a wedding photographer, offering her services to the general public- she wasn’t forced into it. If she felt too compromised by anti-discrimination laws affecting wedding photo businesses, the judge suggested, she should become a different kind of photographer.

Panasonic opts for quality over quantity 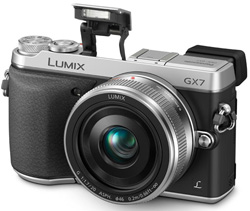 Panasonic will halve its digital camera releases in 2014 according to a Nikkei new agency report.

Panasonic will release five new compact digital cameras next year, half the number it released this year, as it seeks to return to next financial year, the Nikkei reported.

Panasonic will focus on more expensive offerings in 2014, costing US$320 (let’s say $500) or more, such as high-magnification zoom in compact cameras and mirrorless interchangeable models.

Leica buys Sinar
Leica has purchased large-format camera makers Sinar. There are few details, and no financial terms have been revealed.

A translation of the German press release ion the US-based Capture Integration website went a little something like this:
With this takeover, Leica Camera AG completes the company’s portfolio in the high-end digital camera segment and further expands its position in the market for professional photographic equipment….With the Leica S-System….yadda yadda…Leica now possesses a complete product portfolio from a medium format digital camera system to digital view cameras and, as a result of the takeover, is now the only full range provider of digital camera systems in formats larger than the 35mm…yadda, yadda…and the creation of the best possible images.

Apple does a Lytro
The US Patent and Trademark Office has awarded Apple a patent for a camera system that uses a microlens adaptor to enable refocusing of an image after the initial shot is taken, much like the Lytro light-field camera, according to website,  Apple Insider.

Unlike Lytro, Apple’s design employs a movable adaptor situated between the lens element and the imaging sensor. The adaptor holds the microlens array, meaning the camera can operate in two separate modes: high-resolution non-refocusable and low-resolution refocuasable. Lytro’s microlens component can also be moved closer and farther from the sensor, but cannot be completely removed from the light path.

Apple was also in the news this week for acquiring PrimeSense, an Israeli company focused on 3D sensor technology, for a price sources said was around US$360 million.