EOS M2 not for you 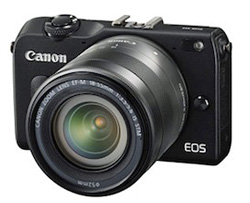 Canon in Japan has launched the EOS M2, a successor to its first mirrorless interchangeable which addresses the slow autofocus performance of the original release.

Other upgrades are a slightly smaller body (by 8 percent) and WiFi. All other specs are the same as the EOS M. Autofocus is claimed to be 2.3x faster than the EOS M with the firmware upgrade which partially addressed the autofocus issue.

International reports state that the new model will only be available in Japan – or perhaps Asia. It’s an unusual move in the era of the globalised marketplace for a consumer camera release to be restricted to one market. Expect great deals on the EOS M in the coming weeks and months!

Ilford back in bankruptcy
The attempt by Ilford Imaging management to bring the business from the brink of failure appears to have failed, with the business filing for bankruptcy again in Switzerland, where it is now based.

Ilford experienced financial difficulties when one of its key investors suddenly withdrew its support last June. It filed for bankrupcy in July but by September had a new lease of life when the CEO and CFO organised a management buy-out. The suucess of the move hinged on finding new financial backers. Operating under a financial cloud, and with shrinking demand as some customers decided to source alternative suppliers, management was not able to find interested investors.

Bankruptcy proceedings are to be fast-tracked to ensure employees receive at least some of their entitlements.

ACCC: Camera reviews must be f’real
The ACCC is addressing misleading conduct related to online reviews, by releasingbest practice guidance about online product reviews for businesses and review platforms.

‘Online reviews are an increasingly popular resource for consumers purchasing goods or services. Many businesses rely on these reviews to promote their businesses, however, some unscrupulous businesses are taking advantage of consumer trust in online reviews,’ ACCC Deputy Chair Dr Michael Schaper said.

The ACCC is concerned that there is an increase in paid-for and fake reviews, taking advantage of consumers who believe they are the genuine experience or views of other consumers.

The guidelines set out three core principles of conduct for businesses to abide by:
– be transparent about commercial relationships;
– don’t post or publish misleading reviews;
– remember that omitting negative reviews can be as misleading as posting fake reviews.

As well as fake reviews, the ACCC is concerned about two other categories of misleading behaviour connected with online reviews.  These are: the manipulation of review results by review platforms as part of a commercial relationship between the platform and the reviewed business; and businesses artificially inflating their review results by offering consumers generous incentives in exchange for reviews of their products or services.

To access the ACCC guidelines click here. For a regular supply of objective, third party camera and lens reviews, ‘Googely’ exclusive to your website at an affordable price, call David O’Sullivan (Photo Review) on 02 9948 8600.

Without a great deal of fanfare, Amazon launched an Australian arm in November, initially offering only ebooks and its range of Kindle tablets.

The Australian store has more than than two million e-books available, including more than 26,000 free titles.

A browse around other Amazon country sites – there are 10 in addition to the US – indicates that its likely Amazon will expand its product offerings into other categories, including cameras.

Currently Amazon US does not sell some of its range into Australia – and this includes photographic gear.

Amazon’s limited launch in Australia could well be due to the high GST-free threshold here. Consumers who buy ebooks from Amazon Australian will pay GST. If Amazon was to introduce its full range on the Amazon Australia website, it would be competing at a disadvantage with its US arm, where no GST applies to Australian purchasers.  Alison Morissette would call that ironic.

– Alternatively, it could do the Kogan/Kogan HK two-step, simply ‘facilitating’ the transaction between Amazon US and the local buyer, GST-free up to $1000. The ACCC and Choice should be totes cool with that.