CR Kennedy has announced a new model in the premium Ricoh GR series of advanced compacts – the eponymous Ricoh GR. 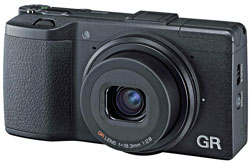 It will be available in late May at an RRP of $849 – less than US pricing (US$800) if shipping costs are factored in.

The new camera has a 16-megapixel APS-C size sensor and one of the smallest bodies in its class. Its casing is made of a magnesium alloy that is both light and highly rigid. All control buttons are positioned for easy access with the right hand. The 3-inch 1.23 million dot LCD monitor features Sony WhiteMagic technology, which adds white pixels to the standard RGB colours to improve image brightness, contrast and legibility in bright lighting.

There’s no anti-aliasing filter in front of the sensor and the new GR image processor, delivers high resolution, colour-rich images and low noise at high sensitivity settings (up to ISO 25,600 supported). A chromatic moiré compensation function is provided to suppress unwanted pattern aberrations and distortion in images and movies.

The lens is a fixed, wide angle 18.3mm f2.8 GR lens with an effective focal length equivalent to 28mm in 35mm format.

The control interface supports ‘DSLR-like’ handling and functionality. The AF button is accessible with the thumb on the back panel and a lever is used to select focusing modes. A preview button has been added to the camera’s side panel for quick confirmation of the depth of field before shooting.

The GR incorporates the Pentax shutter speed/aperture priority (TAv) exposure mode as well as the standard P, A, S and M modes. Raw files are recorded in the open-standard DNG RAW format.