The industry is mourning the passing of the universally-admired and much-loved David Downie. 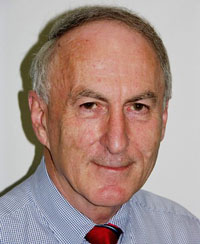 David Downie, one of the real leaders of the Australian photo industry, is best remembered for his long association with Ricoh, and had a distinguished career in other senior roles for decades.

He suffered a massive stroke in hospital last Wednesday and died on Thursday without regaining consciousness.

His funeral will be held at The Templestowe Cemetery Chapel, 263 Foote Street (cnr Church Road) Templestowe, this Friday 25, with a service commencing at 10:30am.

‘David was a father figure to me,’ commented long-time colleague John Rule, now general manager, Brands Australia. ‘Both personally and in business, David was always there to provide advice, support and guidance. His dedication to all he touched was incredible.

‘David was a true gentleman of the industry, well respected and adored,’ he concluded.

Mr Downie, 74, held numerous leadership positions with Polaroid, Ricoh, and Minolta-distributor Hagemyer over the years through the 1980s and into the early years of this century. He became managing director of Ricoh Australia in 2005. He was also a leading light in the distributors’ association, PICA.

‘When he first came into the industry at Ricoh, I approached him on behalf of PICA to join the board, as we were keen to acquire his help in gaining a broader understanding of the CE industry,’ said Paul Curtis, currently a consultant with IDEA, (the re-named PICA).

‘He was an excellent team player and never used his position on the board to further his own company’s agenda. Instead he was very much taken with the concept of trying to grow the industry for all.

‘He was always quiet and  unassuming in his approach and the contributions he made for the many years he sat on the board were invaluable. He was an excellent rational thinker and  I often turned to him for guidance on some of the issues that came up. He was always willing to help.

‘He obviously touched many in very positive ways, and his family would gain great pleasure in knowing how much of an influence he had,’ noted Peter Rose, executive director, PMA Australia. He was another who noted Mr Downie’s qualities as a mentor.

‘And he was held in high regard by all who new him,’ he said, adding that David Downie was ‘one of our industry’s true gentlemen.’

‘During the 10 or so years that I worked with David, I learnt so much from him, he was a great mentor and also a great friend,’ said Ernie Clark. ‘One who was always fair and also highly respected within the industry and amongst those who he worked with.

‘He was a character, and I especially enjoyed our times together on our frequent business trips overseas. He was know for some of his classic out-of-the-blue one liners – some not so repeatable!

‘He will be sadly missed.’