Camera makers are responding to the dramatic dip in digital compact camera sales by reducing the number of models released and down-grading sales predictions, according to a report this week in the Wall Street Journal. 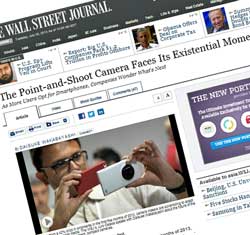 The report argues that ‘the compact digital camera is fading fast’, with picture-taking smartphones as the replacement technology.

According to the latest (May 2013) figures from the Japanese Camera and Imaging Product Association (CIPA), global shipments of compacts are down 42 percent for the first five months of the year. IDC predicts that the global camera market may shrink to 102 million units this year, compared with a peak of about 144 million in 2010.

However, the transition of cameras from the mass market to a more discerning, bigger spending – but smaller – customer base is not all bad news for the photo specialist retailer.

The first part of this transition is seen in the growing market share of higher-margin, higher-dollar-value DSLRs and ILCs in the product mix. Compact sales volumes are falling, while interchangeable lens cameras are moving from around 20 percent towards 30 percent of sales.

With a solid installed base established, even though camera body sales may wax and wane in the short term, there is still opportunity to sell accessory lenses, bags, tripods, etc, as well as printing services and high-end (A3+) home printers – one of the so far neglected opportunities in specialist photo retailing.

Among companies announcing a reduction in digital compact SKUs is Fujifilm, which plans to halve its camera product line. Last year it released 20 models, including no less than five superzoom models with ranges between 40x and 50x. Olympus likewise has announced it has abandoned the bulk of its entry-level cameras to focus on niche compacts such as superzooms and outdoor models, and its PEN interchangeable range. Panasonic also says it has plans to reduce the number of entry-level models.

‘As for digital compact cameras, sales volume declined from the previous year due to the market slowdown and increasing popularity of smartphones,’ states Canon.

Looking forward, Canon has revised its sales target down from 17 million compact camera sales it aspired to in January, to 14 million in July. It also lowered its full year profit outlook by 10 percent, pointing to falling camera sales.

Another report, from global marketing information analyst JD Power, indicates that the type of person buying digital compacts is also changing, with over 50 percent of online buyers in the US identifying themselves as ‘photo enthusiasts’ or ‘semi-professionals’ (39 and 14 percent respectively), while only 40 percent are casual photographers. All to the good, as enthusiasts will be more likely to know that a digital compact takes better pictures when, for instance, used with a tripod, and benefits from the protection of a pouch or bag. It could be assumed that they are also more likely to actually have some hard copy prints made. These are our people!

Given that 50 percent of the general population would not classify themselves as enthusiasts or pros, this would indicate that most mass market snapshooters – the sort of people who in the film era might have purchased a $50 – 200 Kodak camera kit or the like – are now out of the camera market, seeing their smartphones as adequate – and even better, always on hand – for their ad hoc picture-taking.

So what? These are the same people who  – once again in the film era – tended to keep the same roll in the camera from one Christmas to the next. They were of value in the days of film because they did eventually get that role of film processed, and maybe purchased an album or two across the years. But now?

This change in the market is profound but subtle. Photography has for over 100 years depended on the mass market, with a high value minority of photo enthusiasts as ‘the cream’. We are now moving to a new era, the likes of which we haven’t seen since George Eastman introduced the original mass market Kodak camera, where the mass market, if not quite irrelevant, is currently having its needs and wants met by camphones and Facebook rather than a Kodak camera, $9.95 processing and great big family albums.

Persuading these people to print their digital image files would make them relevant once again, but the local industry seems to have feet of clay when it comes to this kind of cooperative initiative. We are sorely lacking leadership from both the largest companies and the industry associations.

If the potential customers for cameras – even compacts – are indeed changing from a sub-set of the mass market, to ‘fans of photography’, retail staff can no longer assume that customers don’t know as much or more about the current crop of cameras as they do. So as well as knowing how many megapixels a particular model has, specialist retail staff will need to know the physical size of the sensor as well. Does it shoot Raw? Half of your customers are likely to know the answer before coming into the shop, and will definitely expect retail staff to know – and also know why it’s a valuable feature

Indeed taking a sunny, glass-half-full perspective, it could be argued that the rapid disengagement by the mass market from digital compacts is a positive, as it will encourage the ‘stack ’em high and sell ’em low’ retailers to find something more profitable to allocate shelf space to. This will reduce the total number of retailers in the market and thus reduce downward pressure on average selling price.

There’s even a silver lining when we examine the CIPA figures more closely: Total digital camera shipments Jan – May 2013 are just 60 percent of the shipments from Jan- May 2112. But in dollar terms, the percentage rises to 71 percent, indicating the average selling price per unit has risen markedly.

Most of the real damage is in the compact, fixed lens segment, where shipments are down to 53 percent of 2012 levels in unit terms and 57 percent in dollar terms.

However, when it comes to cameras with interchangeable lenses, including both DSLRs and ILCs, shipments are at 85 percent of 2013 levels in unit terms and 87 percent in revenue terms – not great, but not the disaster the digital compact market has become. ILCs represent about 16 percent of the total interchangeable lens market – they haven’t shown any marked growth in market share over the past 12 months, and outside of Japan actually appear to be losing ground to DSLRs.

CIPA’s lens shipment data provides another insight into where the photographic market is heading.

While camera sales – even interchangeable lens cameras sales – have fallen away, lens shipments are solid, with 92 percent of the units shipped in 2012 shipped in 2013, and a dollar value 16 percent above the 2012 figure – average selling price per lens has increased!
– Keith Shipton