Adobe Systems has confirmed that it will move its Creative Suite software entirely to ‘the Cloud’ when it releases its latest updates in June.

This makes Creative Suite 6 the last boxed software suite. It will be replaced by the subscription model that Adobe has been peddling since last year, which is based on monthly payments. Following a Government enquiry earlier in the year, Adobe has brought its prices in Australia closer to those charged to its North American customers. Accordingly, local buyers can expect the charges shown in the table below. Existing Creative Suite users will qualify for a discount in the first two years if they upgrade before the end of July, 2013. 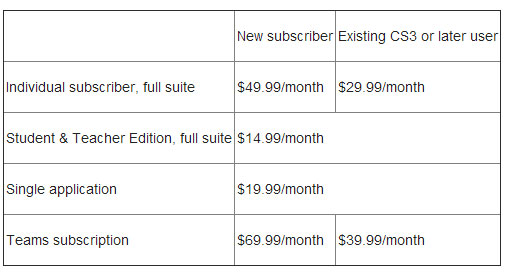 The coming Creative Cloud suite, which will begin to be released next month, will see each application tagged with the ‘CC’ suffix (for ‘Creative Cloud’). It will offer some interesting new features. For example, Photoshop CC will include a new Camera Shake Reduction function, revamped Smart Sharpen adjustment and ‘intelligent’ upsampling for retaining details in images when they are enlarged substantially. The new Camera Raw 8 allows users to apply image edits as a filter to any layer or file in Photoshop, including video files, and adds several new editing tools. Improvements have also been made to Photoshop’s 3D painting tools and Smart Object support has been expanded.

Users of the Creative Suite applications should (in theory) have access to the software they have paid for via a temporary registration which activates the software via the internet. However, if you can’t access the internet but still want to use the software, your access will be blocked, even if you’ve paid the monthly subscription.

Photo Review staff have been unable to access Photoshop (even in the desktop version) when the software tried to access Adobe’s server to see whether it was validated. Having to be in constant internet contact also raises serious questions for photographers who want to convert Raw files when they are on location away from internet access. The move also makes subscribers vulnerable if Adobe faces denial-of-service hacking.

Adobe has published an open letter explaining its decision to move to the subscription model. It can be accessed at http://www.adobe.com/cc/letter.html.

Readers who wish to protest against this development can sign a petition by clicking here.
– courtesy Margaret Brown, Photo Review