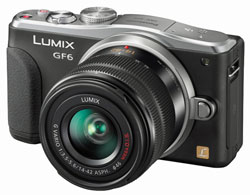 There are new creative features such as Self Shot and Stop Motion Animation, as well as the convenience of Wi-Fi connectivity.

Key features are easy to operate at a touch on the camera’s 3-inch, 180-degree tiltable monitor. The black camera body also incorporates a built-in flash (GN5 at ISO100).

Self Shot makes it easier to shoot self-portraits, by flipping the camera’s rear monitor 180 degrees vertically. Stop Motion Animation enables animation enthusiasts to bring life to still subjects by producing a stop motion video in camera. The Clear Retouch function lets users edit out unwanted parts of a picture after shooting by simply tracing over them on the monitor with a fingertip.

Wi-Fi connectivity (IEEE 802.11 b/g/n) with NFC (Near Field Communication) technology allows users to connect the camera to their smartphone/tablet at a touch, and still and movie shooting can be controlled remotely from the smartphone screen.

By using the ‘Panasonic Image App’ for iOS/Android smartphones/tablets, users can monitor what the camera lens is seeing live from their smartphone at 30 frames per second and set zoom, focus, shutter release, shutter speed, aperture and exposure compensation.

‘Instant Transfer’ allows data to be transferred automatically to the designated electronic device whenever the shutter is released. Users can also touch the image displayed on the camera to transfer it to the smartphone/tablet in playback mode. Location information can be tagged to an image using the GPS log of a smartphone/tablet.

The DMC-GF6 records in Full HD 1920 x 1080 50i AVCHD. With a dedicated video recording button on the top, users can instantly start recording videos while shooting photos without having to make any extra setting adjustments. In addition, the P/A/S/M mode also lets users enjoy professional-like video recording. Videos can also be recorded in MP4 format for playback on a PC or other portable electronic devices without having to convert the files.

The new large, 1040K-dot high resolution monitor has ‘approximately 100 percent’ field of view. The front panel is directly attached to the new ‘In Cell Touch LCD’ with no air layer in between – this suppresses the reflection of external light. The monitor offers impressive visibility with increased resolution, improved colour reproduction and a wider angle of view.

For less experienced users, ‘Scene Guide’ offers 23 sample pictures shot by professional photographers. Users can choose the one closest to the situation they are going to shoot and optimum parameters for shooting the scene will be automatically set. Furthermore, the shooting procedure, technical advice and the recommended interchangeable lens for the scene can be shown so the novice user can learn more about photography.

Though the camera is scheduled for July availability locally, overseas websites are reporting it will be available in the US in late April at a suggested retail price of under US$700 with 14-42mm kit lens.