While other camera manufacturers announced four or five or six new models at CES 2013, Panasonic led the charge with no less than 10 (count ’em) Lumix compacts. 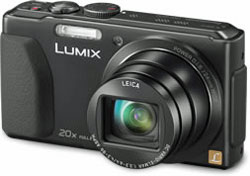 Leading the ‘Travel Zoom’ category is the new 18-megapixel TZ40, which boasts a 20x optical zoom Leica DC Lens (35mm equivalent: 24-480mm) in a pocketable body that Panasonic says is the slimmest in its class. (Whatever that class might be – it’s the slimmest of them all).

Its Venus Engine processor enables high speed, high sensitivity image recording of full-HD video at 60p (NTSC) or 50p (PAL) in AVCHD Progressive format and supports high speed burst shooting at 10 fps. Built-in Wi-Fi connectivity with NFC (Near Field Communication) technology enables users to connect the camera to their smart-phone/tablet without needing cables or even searching for a Wi-Fi hotspot, and the connected device can serve as an additional monitor for setting focus, zooming or releasing the shutter at a short distance from the camera.

A new Instant Transfer function automagically transmits images from the camera to a smart-phone/tablet right after shooting.

In-camera special effects include new Creative Panorama, Creative Control and Creative Retouch functions. The 3-inch 920,000-dot touch screenoperates AF, zoom or shutter release during recording and various playback functions, along with pinch zoom in and out.

The TZ40 comes with built-in GPS .

The TZ35 is a sister model to the TZ40 with a 16-megapixel High Sensitivity MOS sensor and 3-inch 460,000-dot LCD monitor. Touch controls are not included but other functions are the same as in the TZ40. 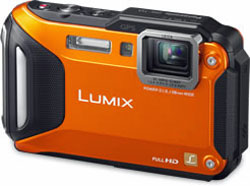 The new 16-megapixelXS1 features a flat body profile with an eye-catching two-coloured design. It’s equipped with a 24mm wide-angle 5x optical zoom lens and movie button that instantly accesses 720p HD video recording. A variety of special effects is offered, along with Auto Retouch and compatibility with AC/USB power charging.

The remaining models are point-and-shoot digicams with built-in Wi-Fi connectivity.

If you are dying to get the details of the last two (I know I am) click here for about 10 linear metres of information. You will not find any pricing of local release information, however.