Paintshop Pro for sale, not rent

Corel announced its newly-released Photoshop competitor, PaintShop Pro X6
Ultimate, will be available via download or in shrink-wrapped box, and for outright sale rather than monthly rental. 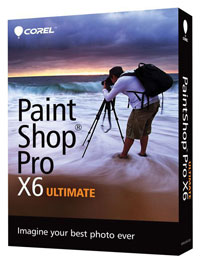 Of as much interest to photographers seeking to unshackle themselves from constant payments to infamous price-gouging Adobe under its cloud-based subscription model, is that Corel offers a perpetual licence when you purchase its software.

‘X6 was developed based on our extensive customer research. Our users told us they want 64-bit power, faster performance, an improved user interface, and continued availability of a perpetual license, so we delivered them,’ said Rick Champagne, senior product manager, Corel Photo & Video.

Corel researchers drew from a base of over 2.6 million PaintShop Pro users, learning that more power, more speed and improved usability were the changes users most wanted to see in X6.

PaintShop Pro X6 Ultimate can be purchased immediately as an electronic download (ESD) from www.corel.com/paintshopproultimate or from Corel resellers. Retail pricing is $129. Upgrade pricing, for users of versions X3 and higher, is $89.

Corel doesn’t appear to have an extensive list of Australian and New Zealand resellers. Is there an opportunity here for photo specialists?