Small retailers would, one suspects, love to tell their shopping centre landlord to take that lease and do with it what country singer Johnny Paycheck famously told his boss to do with his job.

Though specialist photo retailer Melinda Whybrow, owner of Pictures Plus in Launceston, is far too polite to be thinking along those lines, she had an option up her sleeve when landlord Centro announced that her next five-year lease in the small suburban Meadow Mews centre in Kings Meadow, a southern suburb of Launceston, included annual increases of five percent (compounding). And Sunday trading at a premium to that.

‘Once I’d done the sums, I knew that based on current turnover we’d simply be working just to pay the rent for the next five years,’ said Melinda Whybrow.

She had been in Meadow Mews for 15 years and built a sound business, but as photo retailers know, demand and margins in photo services – Pictures Plus main focus – have been diminishing. Another lessee at Meadow Mews, the CD Centre, was likewise wondering whether it was wise to commit to another five years with steadily increasing overheads and an uncertain future in recorded music sales.

The option Melinda Whybrow had in mind was a building just across the car park from Meadow Mews. (Keep in mind this is a small shopping centre, with a small car park!)

She knew that as the only independent specialist remaining in the area – and with the nearest competitor being Officeworks, around 5 kilometres away – Pictures Plus still had lots to offer that no-one else could.

Melinda explained that she had considered that vacant building across the car park a year earlier. Since that time the building had been vacant, and the price had dropped.

‘We bought at the bottom of the market’,’ said Melinda.

– That’s right, ‘bought’!. Because Melinda and her CD Centre colleagues banded together to form a company to purchase the building outright. Now each pays rent to the new company. Each tenant occupies around 130 sq metres and there’s additional space available for future developments.

The result is a seamless and inviting shopping experience the minute you step inside the hybrid store:

‘It really is a delight,’ said Peter Budd, marketing consultant to Pictures Plus key supplier, Photo Direct. ‘The two sets of owners have produced an environment that encourages shoppers to move around the whole area and enjoy a range of product categories from CDs to gifts and canvases.

‘Best of all, their current customers can still shop at their local mall and in a matter of minutes simply cross the parking area to visit Pictures Plus.’

The ‘Plus’ bit of Pictures Plus is a strong line in giftware, which is an integral part of the store’s style. The range includes shopping bags, candles, frames, stationery, ornaments and even retro-style furnishings.

The store runs four Kodak kiosks, a Noritsu 3011 (with film processing) and an HPZ3100.

‘That’s our workhorse now,’ said Melinda, referring to the HP wide-format inkjet printer – a statement which reflects on changing demands in photo printing.

Melinda also offers a consulting service revolving around printing and framing services, which has proven to be a real winner. There’s also a couch where clients can sit and discuss their needs. They can be young mums or people in their sixties confounded by how to get images off their iPads.

Melinda makes the critical point that things ‘insiders’ might see as simple can be real obstacles to those unfamiliar with the new world of digital output.

‘They might want pictures merged, or words added, or simply help in retrieving their photos – not everyone knows how to do that. So we offer a consulting service. We sit down and find out what the customer really wants.’

Pictures Plus charges $25 for ‘personalising’ a printing job, and the actual consultation service is free.

‘It tends to work really well,’ said Melinda. ‘The response has been really pleasing.’ She tells of watching ‘the stress just fall from a woman’s face’ as she realised what she wanted could actually be achieved.

And being helpful also generates repeat business: ‘They rely on us, so they come back to us.’

Pictures Plus handles framing in-house. There’s a large framing section and a framing bench. When custom frame sizes are called for, supplier In2Frames answers the call.

The business attracts customers across all the generational segments from seniors to Gen-Y, and with the music store, Picture Plus can now reach out to attract a younger demographic.

The hybrid store has only been open for three months but already Pictures Plus is benefiting from a new ‘lease on life’.

‘There was an initial drop off in business, then an influx, then it dropped off again and it’s picked up again lately,’ said Melinda. But having a more fair-minded and sympathetic landlord, ‘We can afford to have slight drop off,’ she explained.

With the focus on wide-format, the average sale value has increased significantly. Melinda has used local radio to inexpensively promote the store, and more recently she took out a large advertorial feature in The Examiner, Launceston’s daily newspaper.

-This proved to be a real winner – making such a strong impression that one customer was certain she had seen the store featured on TV.

‘This has been the best investment for us so far, as it appears to have reached our customer demographic,’ said Melinda.

‘Melinda has done a great job in the face of adversity and it’s clear Pictures Plus has a bright future ahead,’ Peter Budd concluded.

And their old shop in Meadow Mews? It’s being used until Christmas as a ‘pop up’ bookstore. 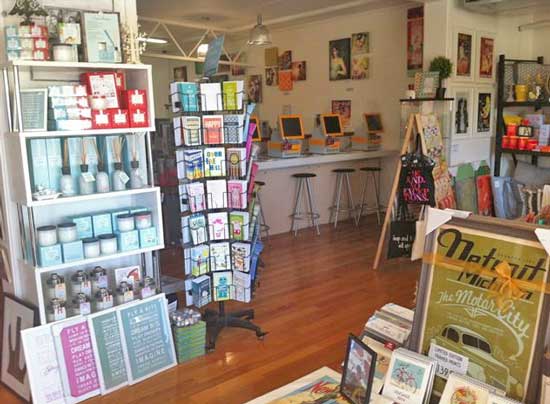