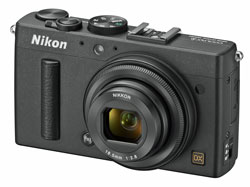 The Coolpix A is being pitched as a compact which will appeal to DSLR-toting enthusiasts. It sports a wide angle 18.5mm, f2.8 fixed focal length lens (equivalent to a 28mm angle of view in 35mm format) and an 16-megapixel APS-format  CMOS sensor. Along with the recently-announced D7100 DSLR, it does not have a low-apss filtter.

With the high resolution 16.2 megapixel DX CMOS sensor combined with the bright f/2.8 Nikkor lens, the Coolpix A adopts an image sensor unit designed without an optical low-pass filter to deliver exquisite detail and image quality.

No local pricing supplied. Nikon’s suggested US price is US$1100. 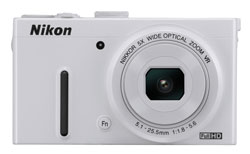 Both the Coolpix P330 and the Coolpix A support the WU-1a wireless adapter, offering live view, remote shooting and wireless transfer of images to smart devices.

No local pricing provided. Nikon US suggested price is US$380. 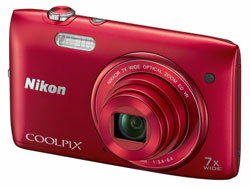 The S3500 ‘is a new Coolpix S-series model that incorporates advanced functions in a stylish design.’

No local pricing, Nikon US suggested price is US$140.

NOTE ON PRICING: Both Nikon and Canon have now adopted a tactic of not supplying RRPs when they announce new cameras and lenses. Canon says it’s because RRPs apparently don’t reflect street pricing in Australia. Nikon hasn’t actually given a reason – they simply followed Canon’s lead. (Although Nikon stopped supplying pro gear pricing prior to Canon’s initiative.) Directing journalists to check prices with local retailers when products are not yet released is a bit of a  ‘Catch-22’.

One of the consequences of withholding local pricing is that it reduces scrutiny of price differentials between Australia and markets where Australian consumers  source grey market products. During 2012 these differentials were reducing, and Photo Counter ran several stories highlighting this initiative to Nikon and Canon’s retailer customers.

However, if we look at the last Nikon announcement before this batch, the Nikon D7100 (Feb 21) some local prices are now being posted and they point to price differentials growing again. The US suggested price for this camera (body only) is US$1200. The local RRP is $1700. DigiDirect has it offered at $1650, while we saw it offered by Digital Camera Warehouse at $1560, and Australian based parallel importer Cameras Direct has it at $1450.

It’s a nonsense that no price lists are published, as all retailers dealing with Nikon and Canon know full well. It’s regrettable that the two camera market leaders are leading us away from transparency.

Nikon would perhaps argue that its efforts to make it difficult for locals to purchase from the US make the price differentials OK. Eliminating or reducing price differentials would be a better, more transparent fix. So long as large price differences exist, local retailers are demonised for price gouging. But the current Federal government enquiry into the pricing policies of Microsoft, Adobe and Apple indicates that local retailers aren’t necessarily the price gouging culprits.

Oh – and then there’s Pentax – whose local prices are equal or better than US prices.   Little wonder, then, that Pentax press releases always come accompanied by RRPs.