Nikon has announced mid-November availability of its new entry-level DSLR, the D5300, along with a fast new f1.4 58mm prime lens. 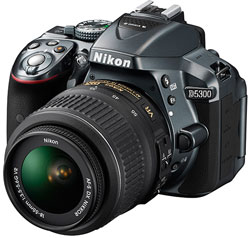 The new camera comes with a 24-megapixel APS-C-sized( DX) CMOS sensor with no optical low-pass filter. It also features the new high-performance Expeed 4 image-processing engine and is the first  Nikon DLSR with built-in Wi-Fi and GPS functions. Other features include an adjustable 3.2-inch monitor with 1.04 million dots, which swings out and swivels through up to 180 degrees, and an optical viewfinder with 95 percent coverage and 0.82x magnification.

The D5300 boasts a  Multi-CAM 4800DX autofocus system with 39 AF points, nine of which are cross-type points. Metering is controlled by Nikon’s 2016-pixel RGB sensor. The new camera can support  continuous shooting at up to five frames/second, or four frames/second with 14-bit raw files. Shutter speeds range from 30 to 1/4000 second, with flash synch at 1/200 second. The D5300 also supports Full HD 1920 x 1080/50p video recording. It will be offered in black, red and grey, and is scheduled for release on 14 November. Pricing ‘is at dealers’ discretion.’ (Body-only US recommended price is US$799.)

Fast 58mm prime
The AF-S Nikkor 58mm f1.4G is designed for full-frame (FX) DSLRs. The new Nikkor 58mm will deliver excellent low-light performance and attractive bokeh, and is a premium general purpose lens which can be used for portraiture, landscape and night scenes.

Its optical design consists of nine elements in six groups (including two aspherical lens elements, and lens elements with a Nano Crystal Coat). The minimum focusing distance is 58cm, and maximum reproduction ratio of 0.13x. This lens takes 72mm filters. It is due for release at the end of this month, ‘with pricing at dealers’ discretion’ (US recommended price is US$1700.)