Overseas reviews of the just-released Pentax K-3 are heralding the new camera as the model which will see Ricoh Pentax give Canon and Nikon a run for their money. 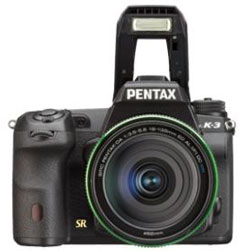 The most talked-about feature is the revolutionary on-demand anti-aliasing filter, a breakthrough in high-end DSLR technology, but first assessments of the new camera are identifying a range of features which make the weather-sealed K-3 ‘a contender’.

The comparison to the D7100 and 70D has an added critical added aspect in Australia: while the camera is about $100 more expensive in the US market, it is $150 – 200 less expensive in the local market, representing great value for local consumers from local retailers.

It’s also less likely to be stocked in CE discount outlets, providing specialist retailers another point of distinction from their larger competitors.

In street price terms, Ted’s and Camera House haven’t yet posted the K3 on their websites for pre-order, while Digital Camera Warehouse has all three on offer: the Pentax for $1344, on pre-order; and $1319 for both the D7100 and the 70D.

Here’s what the pundits are saying about the K3:
– Yet what is different is that the K-3 offers a real alternative, not only in terms of resolution but also in its feature set, which wouldn’t look out of place on a professional DSLR camera.
If the resolution and image quality match what we have seen from other cameras containing the Sony sensor, the K-3 could be a real prospect for Pentax. It could help rebuild its DSLR brand, and provide a real alternative to rival Canon and Nikon. The K-3 seems to be a camera that will allow Pentax to compete with them on the same level.
Amateur Photographer (UK)

– Not only does the K-3 feature significant changes inside and out, it also includes an industry first: on-demand low-pass filtering which lets you choose whether ultimate resolution or resistance to moiré are more important for any given shot. The attention-grabbing, mechanical alternative to an optical low-pass filter is clearly going to get all the headlines, and deservedly so, but there’s plenty else besides that makes the Pentax K-3 an exciting upgrade.
Imaging Resource

– I feel it offers what most people want in a high-end serious camera, and with those gorgeous new Limited lenses, that are SMALL yet high quality, this could be a serious contender.
What I like? Size, Pro Build, Weather Sealed, 23 MP, up to ISO 51,200, 8FPS, 1/8000 shutter and SELECTABLE AA filter that you can turn on or off. THIS IS AWESOME! Also has in body IS, which is GREAT to have. TWO SD cards can be used which is usually reserved for true PRO bodies. Yep, this K-3 means business.
Steve Huff

– With its specification and price tag, the K-3 competes with the Canon EOS 70D and the Nikon D7100, which are top of their respective manufacturers’ enthusiast range of cameras.
Techradar