Nikon Australia has announced the Nikon Df, a new full-frame digital SLR reminiscent of the manually-operated FM series of film SLRs, accompanying the new camera with a 50mm prime lens, the classic combination from the film SLR era. 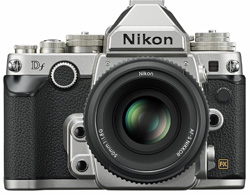 The Nikon Df is the smallest of Nikon’s SLRs and features a 16-megapixel CMOS sensor (as used in the Nikon D4), with mechanical dials for shutter speed, ISO, exposure compensation, and exposure and release modes.

The Nikon Df has an ISO range of 100-12,800 (expandable from 50 to 204,800), continuous shooting at approximately 5.5 frames per second, and is compatible with the full range of Nikon lenses back to the Ai range.

What the camera doesn’t do is shoot video – it’s a stills-only model. 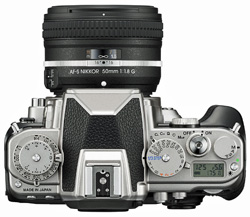 Rertro styling continues with a leather-textured top and grip, along with a body-mounted shutter button with a threaded release port.

The camera will be available in late November in silver/black or black. Nikon Australia advises media to ‘consult local authorised resellers for local pricing’. Digital Camera Warehouse has the camera up at $3149 for body-only and $3449 with the 50mm f1.8 lens – including GST.

The Nikon US press release states the US suggested price is US$2799 body only. (Actually it states the body only price as US$279 – but we assume this is a tyop). With the new AF-S Nikkor 50mm f1.8 lens, the US price is US$2999. So Aussie pricing does not attract buyers to Adorama or B&H, especially given added shipping and GST charges.

AF-S Nikkor 50mm f1.8 lens
Nikon also announced a new wide-aperture prime lens with the Df, the AF-S Nikkor 50mm f1.8. It has Nikkor Ai lens styling, with an aluminum mounting ring compatible with the style of the Df:
–  Aperture range from f1.8 to f16;
– 7-blade diaphagm;
– 11 elements in 9 groups.