Sony in Europe and the US has announced April release of two new entry level enthusiast cameras – the Alpha 58 and the NEX-3N. 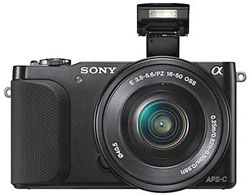 The NEX-3N sports a 16-megapixel APS-size CMOS image sensor capable of an ISO 200-16,000 and 4 fps continuous shooting, in a lightweight, compact body.

The NEX-3N is equipped with a built-in flash, (6 metres at ISO 200). It has contrast-detect AF in 25 zones augmented by manual focus assist. A new zoom lever, similar to those on Sony’s Cyber-shots, provides easy control over the lens focal length plus adjustment to the digital zoom position with unpowered lenses.

Other features include the ability to contrive background blurring with E-mount lenses and record Full HD movies, although with a limited range of frame sizes. The camera’s large sensor also boosts maximum sensitivity to ISO 16,000. The BIONZ processor performs the same area-specific noise reduction tricks as the processor in the A99 camera. 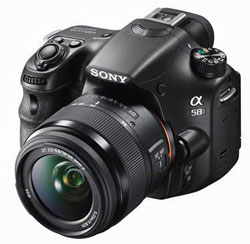 Sony will expand its pellicle-mirror series of interchangeable-lens cameras with the addition of the A58, which replaces the A57 and becomes the entry-level model in the Sony Alpha ‘DSLR’ line-up. (Though with the pellicle mirror and an EVF, is it really a SLR or just a big Compact System Camera?)

It features a 20.1-megapixel APS-C image sensor, a new BIONZ image processor, 100-16,000 ISO range, and a 15-point (3 cross-type) autofocus system. Continuous shooting as at up to 5 fps (8 fps is available, but only in Advance Priority AE mode.)

The A58 doesn’t have optical viewfinding, but uses an OLED electronic viewfinder offering 100 percent frame coverage. It has a tiltable 460k-dot LCD, and a built-in flash (with a range of 10 metres), along with a stereo mic and the ability to shoot 1080/50i video.

The new OLED Tru-Finder accurately shows the results of adjusting camera settings in real time. The new camera is scheduled for release from April 2013.