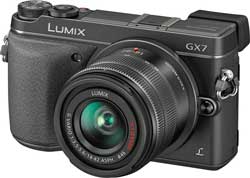 Panasonic says the the enthusiast-oriented  GX7 is the most technically sophisticated model to date and leads the G Series in imaging capability. Its rangefinder-style body is made from durable magnesium alloy with a classic silver and black, or all black designs.

‘The camera excels in both its feature set and design. In the same way as the DMC-GH3 set the benchmark in video functionality, the DMC-GX7 leads the G Series in imaging capability. And, there has been no compromise on camera styling, with a sleek rangefinder body cast in durable magnesium alloy with a classic silver and black, or all black design,’ said Doug Campbell, product marketing manager, Lumix, Panasonic Australia.

Each photodiode in the sensor has been enlarged to improve colour saturation by 10 percent, and the sensor microlenses have improved light concentration, also achieving 10 percent  higher sensitivity. The signal to noise ratio has been boosted by approximately 25 percent.

Another stand-out feature is the integrated 90-degree tiltable ‘Live View Finder’ (EVF), which has a resolution of 2,764,000 dots and delivers ‘approximately 100 percent’ colour reproduction.

The 1,040,000-dot 3-inch touch monitor tilts up by 80 degrees and down by 45 degrees. A new ‘In Cell Touch LCD’, with no air layer in between, offers high visibility for outdoor shooting, with an increased resolution of around 13 percent and improved colour reproduction of 20 percent. Further improvements to the transmitting backlight provide a wider viewing angle and a 25 percent power saving. The GX7 is also the fastest G Series model, with a top shutter speed of 1/8000 second.

The camera includes a fast Contrast AF System in which the camera and the lens exchange digital signals at 240 frames/second to minimise focusing time. Start-up time is half a second and AF functions include Low Light AF, Pinpoint AF and One-shot AF.

Low Light AF enables autofocusing at -4EV – as dark as a starry sky with no other light source. Improved Pinpoint AF allows users to set magnification from 3x to 10x enlargement in 0.1x steps. The Picture-in-picture display magnification ratio of 3x to 6x enables users to set focus on a single target point, while still viewing the entire composition.

Compatibility with UHS-I (Ultra High Speed I) SDXC/SDHC memory cards allows faster data writing when the camera is in the Raw recording mode. The GX7 also supports high-speed burst shooting at 5 frames per second using its mechanical shutter, and up to 40 frames per second with the electronic shutter. AF Tracking enables continuous shooting to capture moving subjects at 4.3 frames per second. 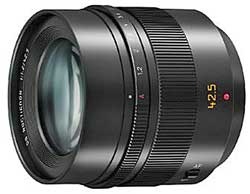 The name ‘Nocticron’ was defined by Leica Camera AG for this lens as a new type, which continues Leica’s tradition for large diameter, high quality lenses. It joins the Leica DG Summilux 25mm/f1.4 ASPH. and the Leica DG Macro-Elmarit 45mm/f2.8 ASPH./MEGA OIS in Panasonic’s premium Leica range of lenses. .