An updated version of the LifePics iPhone app is now available on the Apple app store. 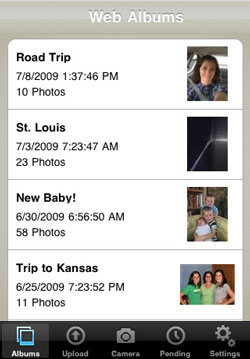 The new version of the Lifepics app is smaller, faster and includes updated support for iPhone 5 so the app fits seamlessly to the screen. It’s also compatible with iPads and iPod Touch devices.

For a much cleaner and modern user experience, Lifepics has also changed the image loading functionality to fade the images in as they load, instead of the current ‘loading’ icon showing. Much of the initial behind-the-scenes processing has been relegated to just that and as a result, the app loads much faster with the loading screen only displaying for a moment before moving the customer right into the app itself.

With past versions of the iPhone app, users could only access photos in their Camera Roll for uploading to the site. Users will now no longer be restricted in this way, as Lifepcis has added support for all local and photo stream albums on iPhone, including full resolution Instagram photos.

‘These changes make for a much faster and cleaner user experience,’ said Tracy Lints, Photo Direct. ‘The Lifepics iPhone app is available for free in the app store and heralds the introduction of a number of upcoming innovations at Lifepics following its purchase last year in November by the Taylor Corporation.’