The statement below from IGA chairman Ben Ryan, which is blisteringly critical of the ‘Colesworths’ retailing duopoly, is remarkable both for its strength of tone and argument – and the fact that it seemingly went unreported in general press, radio and TV! 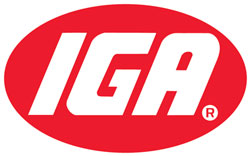 If judged on newsworthiness alone, it would merit prominent coverage in business and even the general news pages of our daily newspapers. It’s not often a captain of business goes bolshie – that’s usually the domain of ratbag trade newsletter publishers! Yet it barely got a run where the general public goes for its news and opinion.

It’s not often that the gloves come off as they have in Mr Ryan’s statement – and as head of IGA he obviously has an axe to grind – but the callow, supine and self-censoring Australian media hasn’t gone near it, presumably fearing a hit to their advertising revenues from big spenders Coles and Woolworths. (In every other aspect of their behaviour, the two schoolyard bullies demonstrate they know how to throw their weight around, so this would be to form.)

The other thing which struck this reader was that the dilemma suppliers, smaller grocers and convenience stores face in a grocery market where the Big Two are clearly way too big for anyone’s good except their own, has some striking resonances in the way Big W, Harvey Norman and their supplier/business partner Fujifilm compete against their smaller specialist rivals. Or customers, in Fujifilm’s case.

Yep – it’s that ol’ hobby horse, 10 cents prints again! And add to that the unholy partnership(s) in online photo services websites between Fujifilm and Big W, and Fujifilm and Harvey Norman.

‘It is time for the large national grocery chains to start playing fair with the Australian people and give everyone a go. They can have their marketing war over products that won’t see the farmers, manufactures and suppliers go broke. They already have 80 percent of the grocery market and dominate many other industries.

‘This is not simply a case of small business crying foul because they don’t want to compete. Small businesses find it almost impossible to compete on a level playing field when the big national grocery chains behave like predators.

‘If a small business loses money it goes under, if a store in a large national chain loses money it is amortised over the group with the hope it will improve over time as their duopoly grows.

Ryan said this is the only country in the world where two businesses – Coles and Woolworths – have been allowed to dominate a variety of industries such as dry groceries, petrol, hardware, and alcohol distribution.

‘There appears to be nothing to stop them behaving in this irrational manner, they appear to want to destroy all competition in the retail sector.’

He said the Australian Competition and Consumer Commission needs to ‘stand up to these companies once and for all and ensure fair competition on a level playing field.’

(Not bloody likely – see the ACCC’s take on how the ‘”milk wars” benefitted all Australians’.)

‘It is time for the large national grocery chains to start playing fair with the Australian people and give everyone a go – they can have their marketing war over products that won’t see the farmers, manufactures and suppliers go broke.’

‘Enough is enough,’ he said. ‘While being able to buy cheap milk and bread from a major supermarket has appealed to many consumers, people don’t understand the long term impact on Australian manufacturers and farmers.

‘Small business is about being local, buying local and supporting local producers, manufacturers and farmers. If this attack on local business by the big national grocery chains continues, then the pressure will cause many to close their doors for good.’