IDEA, the Imaging & Digital Entertainment Association (formerly PICA) this week announced the launch of two upgraded websites, appointed a new business development director, revealed a new show logo (below right) and confirmed that the traditional trade-only Friday will not be feature of this year’s Digital Show. 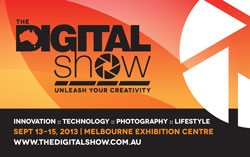 ‘The 2013 Digital Show will still offer a “trade-only” opportunity,’ explained IDEA CEO Katherine Singson. ‘In response to the requests of our members and exhibiting partners we will grant public access on all three days as the consumer interaction is in the focus of the vast majority of the exhibiting  companies.

‘For trade-only partners the 2013 floor plan will include a ‘ProZone Private’ where B2B and trade is the main focus. This area will be in place all three days and exclusive to members of the industry.

She said that the 2013 show will be take up some 13,500 square metres, ‘which is 3000 more than last year. With sales already surpassing the 2012 result, we currently have approximately 30 percent of exhibition space left to be sold within the next six months.’

The show will take up nine out of 20 bays at the Melbourne Exhibition Centre, and will be divided into three key areas – general photography, professional photography and digital lifestyle. The Art & Framing show will be housed alongside.

Timo Kugler who joins IDEA ‘with a strong background in new media and contemporary marketing,’ has been appointed IDEA Australia’s director of business development.

‘Timo’s a skilled operator. He will drive change at the core of our business and help us execute our vision of digital convergence.’

Mr Kugler’s main task would seem to be to persuade CE, IT and telecom companies, who continue to resist enticements to take part in The Digital Show, to sign on.

‘…Our newly appointed director of business development…is engaged in conversations with all major brands. We don’t want to influence these conversations with speculation but we will announce any additions from this sector as soon as we have a firm commitment,’ said Ms Singson.

Canon, Nikon, Olympus and Fujifilm already committed, along with returning and new exhibitors including Leica, GoPro, Adeal, Wacom and Sennheiser, among others. Ms Singson added that all leading brands from the photo imaging industry have already committed to the show. GoPro has taken out four times more space than last year when distributor Blond Robot’s stand was regularly swamped.

Features in 2013 will include a 300+ person theatre to host keynote addresses from industry luminaries, a ‘Training Camp’ for hands-on lectures and a central piazza to celebrate creativity.

Ms Singson says The Digital Show Melbourne will be all about experiential marketing.

“It will focus on entertainment, education and practicality. We will be encouraging all who attend to embrace the benefits of new technology and unleash their creative selves,” she said.

IDEA now has a wealth of talent on hand with Ms Singson as CEO, Tamsin White sales and marketing executive and Mr Kugler coming on board, Eve Philips as business manager and Paul Curtis acting in a consultancy capacity. Not all these roles are full-time.

‘The IDEA Australia team is constantly growing and attracting talent in the process. On occasion the team is supported by freelancing experts,’ said Ms Singson.

Another initiative from IDEA to kick off 2013 is new-look website IDEA and Digital Show websites.

‘The design and build of the new websites was put out to tender and won by a gifted Australian creative agency. The whole IDEA team played a part in the development of the new websites an we’re very proud of the results as they are the visible credentials of IDEA Australia’s way forward,’ said Ms Singson.