IDEA has announced sponsorship of an event called The Digital Playground, to take place at the Overseas Passenger Terminal, May 31 – June 2, at Sydney’s Circular Quay as part of the Vivid Festival. 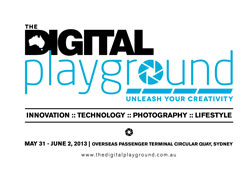 Participation is not limited to IDEA members.

‘The Digital Playground is not limited in scope. We are engaged in conversations with CE and lifestyle brands that complement and enhance photography. As this event has been made public only this week it is too early to announce specific brands, but please stay tuned to our website for further updates,’ she added.

IDEA is also ‘looking into the possibility’ of retailers being involved.

Attendees will have one of the best vantage points in which to take in the attractions of Vivid Sydney, as the venue faces the Sydney Harbour foreshore and the Sydney Opera House, a focal point for the Vivid Festival.

The event will have appeal to newcomers to photography along with enthusiasts and established creative professionals, said IDEA president, James Murray (general manager, Nikon Australia).

‘The Digital Playground will be the ultimate photo opportunity and a perfect fit for our organisation to work together as an industry to deliver an exciting and interactive weekend for people of all ages and interest levels,’ he said.

‘I am delighted IDEA Australia and The Digital Playground is now part of this “must see” global event,’ said NSW Deputy Premier and Minister for Trade and Investment, Andrew Stoner.

All exhibitions at The Digital Playground will be free and open to the public. Some presentations will also be free, while others will ‘require a nominal payment with pre-registration.’

There is a Digital Playground website, but currently no further details except for a counter ticking off the days and hours until the event. .

With less than three months to go, The Vivid Australia website doesn’t include The Digital Playground as an event as yet, indicating, along with the aforesaid lack of detail on presenters, etc, that IDEA has come on board fairly late. Not necessarily a bad thing, as a sponsor can negotiate a good deal with event organisers desperately seeking support. Just be good to know what manner of event we have here. (It appears that there was an event called The Digital Playground last year –  but due to the web search issue noted above, we gave up trying to dig up details.)

Hats off to IDEA for being able to secure this opportunity within what must by now be a tight budget. The financial figures presented at the AGM last October showed IDEA had around $500K in cash, and there’s an extended delay until the cash injection which The Digital Show 2013 should represent for the association, and increased overheads involved with running a larger executive office.

We hear around the traps that retailers are somewhat in the dark about this initiative. Maybe more focus on inclusiveness and communication is required at IDEA, or the retailing fraternity just might see this as an exercise in consumer ‘name harvesting’ by some of their leading suppliers.