In one of the most significant new camera announcements this year, Sony has released details of two new ultra-compact interchangeable-lens cameras with full-frame (36x24mm) sensors, the a7 and the a7R. 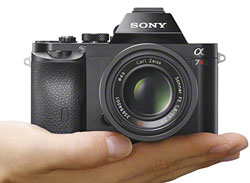 Confirming the marketing message the ‘full-frame is now palm-sized’ the new ILC-a7 and ILC-a7R cameras have dust- and moisture-resistant bodies with aluminium alloy chassis. A detailed ‘First Look’ at the a7 has been posted on the Photo Review website here.

Both models have virtually identical body designs that feature built-in high-resolution EVFs with Eye-AF detection and tilting LCD monitor screens with rubberised mode and exposure dials to provide a comfortable grip. The ILC-a7 has a polycarbonate front plate and will sell for an RRP of $1999. This model has a 24-megapixel resolution sensor with embedded phase-detection pixels to support tracking AF for fast focusing when shooting moving subjects. It supports continuous shooting at up to five frames/second.

The ILC-a7R is a 36-megapixel model with magnesium alloy front and top plates. Its sensor has no low-pass filter and features improved microlenses that are offset towards the edge of the chip to minimise light loss when third-party lenses are used with lens adapters. This model will retail for $2499.

Both cameras come with built-in Wi-Fi and NFC (Near Field Communication) support and both have inherited the three dial control system from the NEX-7. The also feature a new dual menu system that allows users to choose between a NEX-style user interface or one based on the Sony Alpha DSLR cameras.

Both cameras are highly customisable, with nine button controls to which up to 43 settings can be assigned. The dials can also be customised. Sony’s Quick Navi screen is available to provide fast access to frequently used adjustments and the AF system has the same adjustable spot mode as the NEX-7, which allows the size of the spot to be controlled.

The new cameras will begin shipping in November and will be offered as body-only or in kit format with the 24-70mm and 28-70mm lenses. The a7 kit, which includes the 28-70mm Sony lens will be priced at $2199. A vertical grip will also be available. Sony has also announced it will phase out the NEX brand name by the end of 2014.

New lenses
Coinciding with the release of the new a7 and a7R cameras, Sony will expand its compatible lens offerings with the addition of five new E-mount lenses.

Sony will also offer the LA-EA4 adaptor, which enables owners of A-mount lenses to use them on the new E-mount cameras. Translucent Mirror Technology inside the adaptor enables speedy, accurate phase detection autofocus with these lenses and auto exposure is also available while shooting stills or video. The LA-EA4 adaptor will be priced at $349.