Fujifilm was among the leading camera companies which chose CES 2013 as its platform to announce new releases. 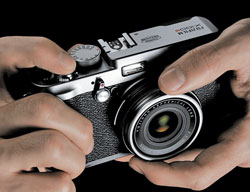 Featured are the X100S, a high-speed successor to the X100, which sports a high-quality Fujinon 23mm f2 lens. It also features a new 16.3 megapixel APS-C X-Trans CMOS II sensor and EXR Processor II, which claim to increase resolution by around 25 percent and cut noise by even more.

The X100S offers the world’s first ‘Digital Split Image’ feature according to Fujifilm. This displays dual images on the left and right to be lined up for manual focusing, enabling more accurate focusing, especially when working with an open aperture or macro shooting. A Focus Peak Highlight function highlights high contrast areas for more precise fine tuning of focusing. Users can also switch between optical and electronic viewfinders. The Optical Viewfinder (OVF) enables users to see the subject as they do with the naked eye and is handy when time lag is an issue. The Electronic viewfinder (EVF) enables users to check focus, exposure, white balance and depth of field while composing shots. 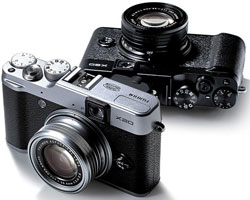 Also new to the X-series is the X20 premium compact, which inherits the high-precision lens and refined design of the X10 as well as a new Advanced Optical Viewfinder. The new camera sports a 12-megapixel, 2/3-inch  (ie, mid-sized) X-Trans CMOS II sensor without an optical low pass filter plus an EXR Processor II. The sensor has built-in Phase Detection pixels for high-speed AF in as little as 0.06 seconds. A Focus Peak Highlight feature aids precise manual focusing.

Fujifilm has also unveiled a number of superzooms. The S82** range features four  models, all incorporating fairly fast apertures of f2.9 to f6.5, and Fujinon long zoom lenses from 40x optical (S8200) to 46x optical (S8500). (Why the?) They all support 1080i movie capture at 60fps with stereo sound  plus slow-motion capture at 480fps.

The new FinePix SL1000 trumps the S82** range with a 50x zoom lens that can focus from 1cm to infinity. If 50x is not enough, ‘Intelligent Digital Zoom’ doubles the focal length. Equipped with a 16-megapixel 1/2.3-inch (ie, tiny)  BSI-CMOS sensor. this camera supports sensitivities up to ISO 12,800 and boasts AF speeds as fast as 0.2 seconds, a start-up time of 0.9 seconds, and continuous shooting mode that reaches 10fps at full resolution (max. 9 frames).

Fujifilm’s new T-series cameras, the T500 and T550, provide a 12x zoom lenses and 16-megapixel CCD sensors in a slim body that comes in black, grey, purple, red and white. The T500 has a 2.7-inch LCD screen while the T550 has a 3-inch LCD screen. These models support a top sensitivity of ISO 3200 and 720p movie recording. The battery is charged in the camera via USB cable.

Fujifilm has also announced a new ‘All-Round Tough’ camera, the familiar-looking FinePix XP60, which is waterproof to 6 metres and can withstand drops of up to 1.5 metres and temperatures down to -10°C. Featuring a 1/2.3-inch 16 million pixels CMOS sensor, the FinePix XP60 offers high-speed processing, the CMOS sensor empowers continuous shooting at up to 10 frames/sec. (max. 10 frames) or ultra-high-speed continuous shooting at up to 60 frames/sec. (max. 70 frames) with a dedicated ‘Burst mode button’ for instant switching into continuous shooting mode. The camera’s 5x optical zoom lens (28-140mm equiv.) is supported by sensor-shift stabilisation.