Fujifilm has added another two models to its premium ‘X’ range, the X-E2, with a 16-megapixel APS-C sized sensor, and the XQ1, an ultra-compact advanced camera with a 12-megapixel 2/3-inch sensor, and has a major firmware upgrade for the previously-released X100 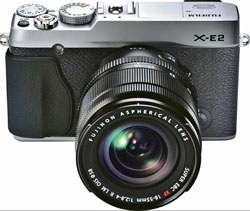 The Fujifilm X-E2 will be offered in solid black or two-tone black and silver. Fujifilm says the X-Trans CMOS II sensor, which was also used in the X100S, controls moiré and false colour generation. The X-E1’s EXR Processor II can harness information from more than 100,000 phase detection pixels embedded in the sensor’s surface and Fujifilm’s Lens Modulation Optimiser (LMO), enables the processor to correct edge softening as well as diffraction blur, which is caused at small aperture settings.

Fujifilm states the X-E2 starts up in half a second, has virtually no shutter lag (0.05seconds), and high speed continuous shooting of 7 frames per second for up to approximately 28 frames. It also claims the world’s fastest AF speed of 0.08 seconds. Focusing continues until the shutter is pressed half way during continuous AF. Manual focus has been improved with split image focussing technology.

Other features include a manual aperture ring on the lens plus shutter speed and exposure compensation dials on the top plate. Exposure compensation has been increased to +/-3EV. electronic viewfinder is 2.36 million dot OLED and the 1.04 million dot, 3-inch LCD monitor has a high viewing angle and is protected by reinforced glass.

The X-E2 can record full HD video (1920 x 1080) at up to 50 frames/second and AF tracking has been improved to ensure good focus speed, accuracy and smoothness. Film simulation settings and +/-2 EV exposure compensation are available for movie recording.

The Fujifilm X-E2 will be available from November in a kit with Fujinon XF18-55mm lens for an RRP of $1899. Accessories include a leather case, Fujinon XF and XC lenses, M Mount Adapter, Hand Grip, Three dedicated flash models (EF-X20, EF-20, EF-42), Protector filters and Remote release. 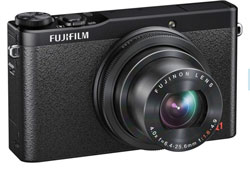 The new Fujifilm XQ1 is the smallest X Series camera. It has the same 2/3-inch X-Trans CMOS II sensor and EXR Processor II as the Fujifilm X20, bvut comes with a new 4x optical zoom lens that covers focal lengths equivalent to 25-100mm in 35mm format with maximum apertures of f1.8 to f4.9.

Fujifilm says the XQ1 has a quick start-up time, AF speed of 0.06 seconds, a shooting interval of 0.3 seconds (in high performance mode) and a shutter lag of just 0.015 seconds. Other features include Focus Peak Highlighting and a control ring around the lens that can be programmed to adjust  Advanced filters, high level manual focusing, aperture and shutter speed settings. Additional customisation is available via an expansion function (E-Fn) button on the back of the camera.

The Fujifilm XQ1 is also scheduled for release in November. Pricing has not been supplied.

Fujifilm has released free dedicated firmware for the X100 camera that will improve autofocus and manual focus performance.

The new firmware provides the following improvements:
1. AF Speed will be approximately 20 percent faster for bright scenes, dark scenes and changed focus distance.
2. Before switching to macro mode, the focus distance from the lens surface has been improved by approximately 30 percent.
3. The ‘Focus Peak Highlight’ function which features on the X100S and X20 cameras has been added via this firmware update. It assists with accurate and sensitive manual focusing by enhancing the outline of the subject in high contrast.
4. When adjusting focus with the electronic viewfinder or LCD, it will now be easier to capture the focus peak by displaying the image with a shallow depth of field using open aperture.
5. The start-up time for the X100 has been improved by approximately 0.2 seconds (with Quick Start mode off).
6. Previously, the focus area was selected while holding the AF button on the back of the camera. With the firmware update, pressing the AF button switches to the focus area selection screen where you can select the area of choice.