Fujifilm has announced the fourth model in its mirrorless interchangeable X- series, the $849 Fujifilm X-A1 – available next month in either black, blue or red. 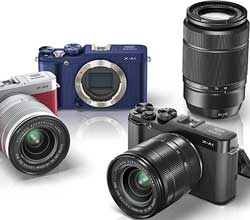 It features a 16-megapixel APS-C sensor and Fujifilm sees it as a camera for photographers moving up from a digicam (or smartphone) to an interchangeable-lens model.

The X-A1comes with a tiltable, 920,000 dot, 3-inch LCD monitor, built-in flash, wireless image transfer and hot shoe. It weighs only 330 grams, including battery and memory card

The Mode dial provides access to Advanced SR Auto, which automatically recognises a scene type. It also provides access to eight Advanced Filters for artistic photography, and five Film Simulation modes to produce effects such as PROVIA, VELVIA, ASTIA, Monochrome and Sepia. Two Command Dials allow users to adjust the aperture, shutter speed and exposure compensation quickly with their thumb. Individual buttons are also provided for White Balance, Burst Mode and Macro. Users can set the sensitivity settings from the regular ISO200 to as high as ISO6400 in 1/3 step increments. ‘Extebded range offers the addition of ISO100, ISO12,800 and ISO25,600.

It has a start-up time of 0.5 seconds in quick start mode, shutter time lag of 0.05 seconds and a maximum burst speed of 5.6 frames/second.

It will be offered in a kit with the XC16-50mm lens at a recommended retail price of $849.

Fujifilm has also announced a new Fujinon XC 50-230mm f4.5-6.7 OIS lens, with an RRP of $599. It’s the 10th lens in the X-series range. Covering focal lengths of 76mm-350mm (35mm equivalent), it features high speed autofocus and optical image stabilisation. The optical design comprises 13 all-glass elements in 10 groups including one aspherical elements and one ED element. It features optical image stabilisation and comes in black or silver.