Choice (aka The Australian Consumers Association) continues to present half-truths, red herrings and hyperbole as a substitute for valid argument against reducing the LVT on privately-imported items.

Choice director of campaigns, Matt Levey, claims that reducing the LVT would be ‘a new tax on the internet designed to prop up parts of the local retail sector, hitting consumers with big costs and delays, and dragging down our competitiveness.’

Choice argues that there is a ‘substantial expense of collecting the tax without reforms to parcel processing’.

‘The fact is that if you lower the threshold without streamlining the process, you turn every parcel delivery business into a doorstep tax collector, and hand consumers big costs, delays and bundles of red tape.’

– An alternative if Choice really had level playing fields and the efficiency and competitiveness of the Australian economy in mind would be to campaign on behalf of Australian consumers for just such a strreamlining of parcel processing. If other countries in the world can collect GST/VAT from private offshore purchases at a far lower threshold, there’s clearly something gravely wrong with Australian parcel processing which needs to be fixed.

Choice’s main argument is that lowering the LVT would have no significant impact because, it claims, ‘the top reason Australians purchase online is so they can shop at the hours that suit them, followed closely by the convenience of getting products delivered to their door.’ Only 12 percent nominated saving on paying duties and taxes as a motive for purchasing on overseas websites, according to Choice.

– In which case the other 88 percent won’t have an issue paying a little extra for all those other good reasons – convenience, delivery, etc – and the Australian economy benefits with a contribution to tax revenue.

But here’s the full travesty – Choice has published five ‘myths’ –  which are key points in the arguments of the Australian retail industry for a fairer system – and then attempts to prove them false:

Myth 1: Australia is being denied hundreds of millions in GST revenue because of the $1000 GST low-value threshold. The facts: This is imaginary revenue. Without reforms to parcel processing, research has shown that the current costs and delays of collecting the GST would outweigh the benefits.

As noted above, it seems like the Productivity Commission et al have recognised a key improvement opportunity for the Australian economy in improving and streamlining the Australian parcel processing system to better suit a globalizing economy. Surely this must be a key priority for the 21st century.

The LVT Taskforce final report published a chart (see separate story) in which if it cost $16.40/parcel to collect GST (a figure Choice seems not to quibble with), and the LVT threshold was set at $100, revenue would be 12.1 percent higher than costs. This is the 2014 figure – as the number of parcels increases, the revenue would increase.

Myth 2: Online shopping is costing local retail jobs. The ‘facts’: The vast majority of online retail is domestic. In addition, Choice’s research shows the main reasons Australians shop online are so they can shop at the hours that suit them, followed closely by the convenience of getting products delivered to their door. Only 12 percent nominated saving on paying duties and taxes by purchasing on overseas websites.

Myth 4: Australia should simply adopt the UK system for applying sales tax to imports. The ‘facts’: This argument ignores the fact the UK is part of a common market, and that Australians already face substantially higher prices than overseas consumers for many identical products.
– Last time I looked UK prices were equal to or higher than Australian prices in most categories – especially with that 20 percent VAT! Bacon is cheaper, though. See how they go from the particular – the UK – to the general – overseas consumers – to confuse the reader? And what’s the bloomin’ European Union got to do with it, anyway?

Myth 5: Overseas online purchases hurt the local economy. The ‘facts’: This is true to only a minor extent. Figures from the ABS show that online sales under the LVT accounted for just 2.85 percent of total retail sales in Australia in the 2012-13 financial year. Furthermore, the economy also benefits greatly from competitive pressure from overseas retailers. Money saved from cheaper overseas purchases is not automatically lost to the domestic economy, but supports spending in other sectors.
– Love that ‘only to a minor extent’ line. Yeah, sure I beat my wife – but only to a minor extent. So the Australian economy wouldn’t benefit immensely if local retailing grew by whatever it’s current growth rate is plus 2.85 percent? And while money saved from OS purchases might be spent in the local economy, it might also be spent on other overseas purchases – Choice wouldn’t really know. We do know, however, that  the money spent on overseas online purchases definitely and absolutely hurts the local economy. (Well, except maybe if they are via Kogan or Noworries or the other Australian-based ‘overseas retailers’ – then they only hurt the local retailers who are playing fair.)

Punish local retailers!
It’s not a myth is that Australian consumers are protected by some of the most robust consumer protection laws in the world. It’s one of many factors which adds to costs of retailing in Australia.

Yet even though Choice seems to place absolutely no value of these laws when it comes to the pros and cons of shopping with overseas retailers, it’s quite the vigilante when it comes to making sure local retailers comply. 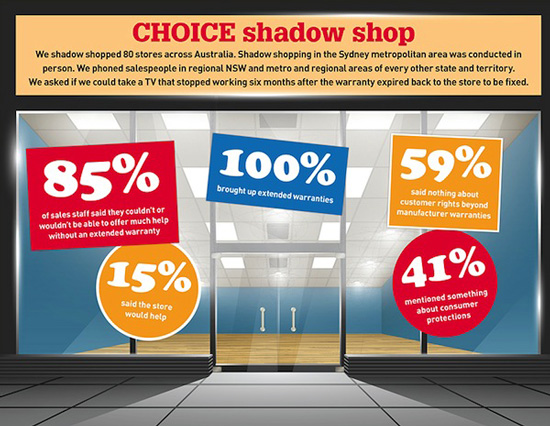 This week, it claimed it sent two journalists pretending to be customers into 80 Harvey Norman, The Good Guys, and JB Hi-Fi and uncovered ‘widespread violations of the Australian Consumer Law (ACL)’. Gotcha! ( In the fine print, Choice says that most of the enquiries were made over the phone rather than in store, but no matter.) According to Choice, when asked about returning $2500 televisions, ’85 per cent of sales staff at Australia’s biggest electronics retailers had limited or no understanding of their obligations under the ACL.’

Choice wanted the local stores punished: ‘we’d like to see the ACCC and fair trading bodies investigate these breaches,’ said the Choice spokesperson.

If the Choice figures can be believed (see above) these retailers have a job of work to do to educate staff on the ACL, as ignorance of the law is no excuse. But the salient point is that Australian consumers purchasing in Australian stores are nonetheless protected by the ACL.

So isn’t it risky for Australian consumers to abandon those protections which Choice no doubt lobbied hard for? Shouldn’t Choice be warning consumers of the perils of the ‘buyer beware’ retailing environment outside of Australia?

Choice naively believes (or, more likely, cynically pretends to believe) that the Australian Consumer Laws will somehow protect Australian consumers against offshore online retailers! In an article on online shopping it advises consumers to contact NSW Fair Trading or Consumer Affairs Victoria if they have a problem with an offshore online retailer. Here’s its amazing advice for offshore online shoppers:
Can I get a refund?
Most of the time, there should be no problems obtaining a refund. It should be just like regular shopping, provided you have the physical address of the trader.
What if the product is faulty?
The returns procedure should be easy to follow, with clear indications of the steps involved, and who to contact if the returns procedure fails. The ACL regime requires retailers to accept returns if the product is faulty or does not match its advertised description…
When do I pay?
Your account shouldn’t be debited before you receive the goods. The amount you pay should be that stated when you ordered, with allowances for any currency conversion.
Where can I complain if something goes wrong?
Contact the online store using the information provided in the website’s Contact Us section. If you cannot locate a Contact Us section on the website, or receive no replies or action from your email and/or phone complaint, try locating the company on social media – you can do this by putting the online retailer’s name and ‘Facebook’ or ‘Twitter’ into a search engine. Once you’ve located their page, ‘like’ or ‘follow’ them and try posting your complaint on their social media page. Generally, the public-facing nature of social media makes companies more reactive to complaints. If your post is removed, don’t be afraid to re-post as many times as necessary.
If you don’t get a reply, get advice from your local fair trading/consumer affairs authority. Under the Australian Consumer Law (ACL) regime that came into effect at the beginning of 2011, retailers of all kinds are required to follow strict guidelines when it comes to returns, exchanges, the quality of goods and the representations of goods through marketing and advertising.