The Camera Action Camera House liquidator has announced a creditors’ meeting for March 26, accompanied by a listing of creditors which sees Camera House (Raleru Ltd) as the largest by far, with $2.3 million owing to it. 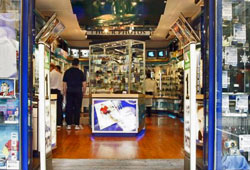 Overall, Camera Action’s listed debts amount to $3.6 million, which when set against the estimated realisable value of assets of $103K, leads to an outcome in which unsecured creditors are unlikely to see anything back following liquidation of the company.

‘The prospects of getting any return is extremely unlikely,’ said liquidator Paul Vartelas, BK Taylor & Co.

In fact, there is probably not sufficient funds to even meet the liquidators estimated charges of $119K.

‘The vast majority of fees will probably remain unpaid,’ said Paul Vartelas, adding that Raleru as a secured creditor might see some payment before all liquidation fees are met.

Suppliers may gain some financial relief via their credit insurance policies, with insurers then becoming unsecured creditors to Camera Action for the proportion of the debt the policy covers.

However, there is some good news: All staff entitlements are likely to be honoured via the Federal Government’s Fair Entitlement Guarantee, brought in as law at the end of last year. There are 25 staff excluding the two  directors, 15 of whom are owed more than $10,000 in wages and holiday pay, and 11 owed more than $20K. The total in staff entitlements is $481K, with a further $101K owed to superannuation funds.

‘There is good news for staff in two ways. Firstly they should get most if not all their entitlements, and secondly 15 to 20 of them have been offered employment by the new retailer, DigiDirect,’ said Mr Vartelas.

Mr Vartleas has already put in a claim and estimates he should be in a position to disburse payments to staff in around 8 weeks, following payment by the FEG.  (Once again, as is the case with credit insurers, the FEG then replaces staff as Camera Action creditors.)

Raleru is the only secured creditor, and its debt takes precedence over the staff entitlements and outstanding superannuation obligations. Without the FEG, staff would have lost all wages and superannuation owing.

Relative to the size of the business, Tom Saade Camera House is probably one of the hardest-hit unsecured creditors, with $40K owing.

An unusual factor in the Camera Action liquidation is the absence of a large bank debt. Paul Vartelas explained that when Camera Action’s directors, Paul and Sina Clayton, sold their home last year, the funds were put against bank debt.

‘Most of the money went to the banks,’ he said. ‘Camera House then stepped in,’

Raleru has since then been playing a role similar to a bank, as the liquidator explains it, except providing stock rather than cash – which has given it the secured creditor status that banks would normally hold in a liquidation.

Another unusual factor, according to the liquidator, is that Camera Action’s directors still enjoy support and empathy from the majority of their unsecured creditors.

‘What’s surprising is that suppliers are supportive of the directors,’ he said, while noting that a few have been more hostile.

He said suppliers seem to be weighing the immediate loss against the fact they have traded over many years with Camera Action, so a loss of say, $50K, has to be put against years of turnover which would amount to million of dollars. He was surprised that for the most part, suppliers were continuing to offer supportive comments about the directors.

He noted that most creditors acknowledged that Paul and Sina Clayton had done all that they could and made major personal sacrifices, including the loss of their house, to save Camera Action.

Though the liquidator said that there may be a case for arguing that payments to unsecured creditors over the past six months were ‘unfair preferences’ and thus contestable, the fact that those suppliers continued to supply stock to Camera Action made this less likely.

He added that some of the amounts claimed by suppliers will be reduced as returned stock is factored in.