Paul and Sina Clayton have taken up roles with DigiDirect, the retailing operation which last month opened its first Melbourne store in the Elizabeth St premises vacated by Camera Action Camera House, their former business. 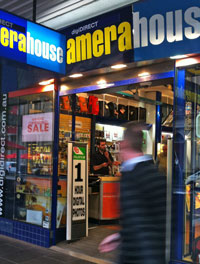 Paul Clayton has been appointed DigiDirect’s chief purchasing officer, a role he is well-qualified for after 15 years on the Camera House purchasing committee, five as chairman.

Sina Clayton will be involved in marketing, with an initial focus on developing a more sophisticated internal and external online operation linking the three stores and website.

Camera Action Camera House went into liquidation in late February in with debts of over $3 million. (See earlier story.)

The retailer joined Camera House last year as an alliance (non-branded) member, and would now appear to be a full member of the group by virtue of the Elizabeth St store.

Shant Kradjian, DigiDirect’s 26-year-old managing director, welcomed the addition of Paul and Sina Clayton to the team, and said that the new store had made a great start.

He said that he had plans to roll out multiple DigiDirect stores around the country as the opportunity arises, without nominating the ‘next cab off the rank’. 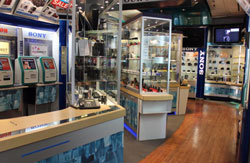 He explained that the Camera House brand was retained for the Melbourne DigiDirect store to retain the goodwill with customers built up over 27 years.

– As far as Photo Counter can conclude, that goodwill was something of a bonus for DigiDirect: Mr Kradjian moved quickly to secure the lease on the 217 Elizabeth St premises, with the store shuttered for only a week before re-opening under new management.

It’s understood that he was able to secure the new store free of any fee for the goodwill component of the long-established business, which would ultimately have gone to Raleru, as the secured creditor. This made the deal exceptionally attractive to DigiDirect, as goodwill has been estimated as approaching $500,000.

‘The old Camera Action has rebounded well so far as DigiDirect Camera House,’ said Mr Clayton. Seventeen of the old staff have been re-employed, and turnover has come back nicely. It was important not to lose the goodwill built up over 27 years and foot traffic and sales indicate that has been achieved so far.

‘Shant as some fantastic staff in Sydney. Hopefully Sina and I can make a valuable contribution down here in Melbourne.’

With only one other store in the Melbourne metro area, 28 kms to the east in Croydon, maintaining a Camera House presence in the city would seem to be critical to the relevance of Camera House as a national retail brand.

Commenting on the failure of the Camera Action business, Mr Clayton conceded that mistakes had been made – specifically in opening a second outlet in a high-cost, low traffic location – but he and Sina Clayton had done everything in their power to fulfill their commitments to creditors, not least selling their house to repay debt.

‘History is history,’ he said. ‘I’m moving on. What other option do you have?’ He added that he was still perplexed as to why Raleru decided to suddenly cut off supply to Camera Action in January, some six months into an 18-month schedule of debt repayment which he said the business had been adhering to. It was this change that forced the Claytons to call in the liquidators.

‘If you asked a month before whether it was likely we would be in this situation we would have laughed at you,’ he said.

He said that Camera Action seemed to have the full confidence of insurer QBE, as QBE terms were extended due to Camera Action’s consistent repayment of their arrangement over the first six months.