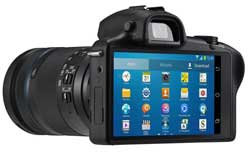 The camera features a 20-megapixel APS-C sensor, fast autofocus, 8.6fps continuous shooting, and a 1.6GHz quad-core processor for superior Android performance.
There’s also WiFi, Bluetooth, GPS and GLONASS (which sounds like an affliction from sitting down too long!). Images can be transferred over high sped mobile networks.

It also has a ‘story album’ application pre-installed. This allows the user to take a series of images, arrange them into an album and create their own photobook! The completed project is then ordered directly from Blurb.com via the camera’s menu.

In addition, when linking the camera to the Dropbox cloud storage system, the user will receive 50GB of Dropbox space for two years.

Facebook gets collaborative
Facebook has launched a ‘shared albums’ option for users, allowing groups of people to upload photos to the same album.

When you make an album ‘shared’, you can add friends as contributors. This allows them to add, view and edit photos in the album. You can choose who can see the shared albums you create. If you’re a contributor, you can add photos but you won’t be able to adjust the privacy of the album.

The album ‘founder’ can add 50 contributors, each of whom can post 200 pictures to the album.

Harvey down but on the up
Harvey Norman full year profit has fallen 17.5 per cent. The retail/franschisor/property businesss made a net profit of $142 million, down from $172 million the previous year.

The result was affected by a $41 million write-down in the value of the company’s properties.

Sales in its Northern Ireland business were almost halved. Australian sales were down 4.2 per cent during the year, while sales in Slovenia and Croatia were down 4.6 percent and Ireland was down 1.2 percent.

In New Zealand, sales were up 8 percent.

Harvey Norman said sales had picked up during the second half of the year, and were up 5.3 per cent higher in July compared to a year ago.

Russian roulette for photos
An article in Don Franz Photo Imaging News news;letter carried some sobering facts on storing images on digital media or the web:

– According to computer technicians, the typical life of a computer hard drive is 6-7 years. Repairing any physical damage requires opening in a clean room to prevent contamination from dust, etc.
– Dutch magazine PC-Active performed a test over two years with 30 different brands of CD, reading them several times, and determined that most of them could no longer be accurately read after that period.
– According to IBM storage specialist Kurt Gerecke, the life of a typical CD-R is 2-5 years due to oxidation.
– In 2009, Yahoo closed its online photo storage activity and many users lost years of memories. In 2010, the Google Picasa Web album service was closed due to “technical problems” and has never been reopened. Dropbox notes in its terms of service ‘You, and not Dropbox, are responsible for maintaining and protecting all of your stuff. Dropbox will not be liable for any loss or corruption of your stuff, or for any costs or expenses associated with backing up or restoring any of your stuff.’

All good arguments for creating prints of priceless photographic memories. 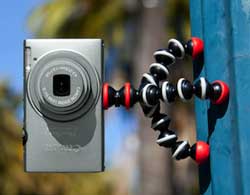 Joby has announced two new compact mini-tripods in the US, one with magnetic feet.

The GPod Mini Magnetic has magnetic feet that fasten to all types of metal objects. It’s designed for point-and-shoot cameras and actioncams.

The MPod Mini Stand fits most smartphones, with or without protective cases. Its expandable head mount clamps the device in place.

The EF-S 55-250mm lens includes a 3.5-stop optical image stabiliser. Its optical design includes 15 elements in 12 groups, with one Ultra-low Dispersion (UD) element and Super Spectra Coating to minimise internal reflections and prevent ghosting and flare. The lens can focus to 85cm throughout the zoom range and the STM motor ensures quiet autofocusing while recording movie clips. The front element doesn’t rotate during focusing or zooming, enabling use of angle-critical filters.

The new lens weighs only 375 grams. No local release date has been provided and Canon Australia no longer provides pricing details. US websites are now taking pre-orders at US$350.