And now, the KoPro
Online retailer Kogan has launched a Full HD Action Camera range which it says has near-identical specs to the market-leading GoPro range, but at prices from $119 to $139. 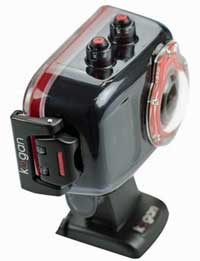 The Kogan Action Cam weighs 110g, has a 12-megapixel sensor and can record ‘professional quality’ HD 720p videos at 60fps. (Yet to see press release where the camera records ‘amateur quality’ video). It’s housed in a case that’s waterproof to 30 metres, shockproof to falls of up to 2 metres and dust-proof.

It features a ‘large’ 1.5-inch LCD colour display (always better than a small 1.5-inch LCD, but not as good as a large 3-inch LCD), a 1000mAh battery and accessories including a bicycle/handlebar mount, helmet mount, car suction mount and tripod mount.

‘We’ve designed a Kogan product that offers the near identical specs, even better in some regards, for one third the price of a GoPro. At this new price point, more Australians will be able to capture their fun, action-packed, and cherished moments on the go.

‘We’re not in the business of creating demand. We service demand. We’ll leave creating demand up to the likes of Apple, GoPro and Samsung and they’ll inevitably have to include their marketing expenses in the price tags of their products. Our goal is to make the latest in-demand technology more affordable for everyone,’ he said.

Canon calls for environment grant applications
Canon has made a final call-out for its 2013 environmental grants program – with applications closing on August 9.

The program is offering nine grants of Canon products, worth a total of $45,000 to Australian and New Zealand community-based projects that can demonstrate the greatest positive impact for the environment. University and school students are also eligible to apply for these awards if they are currently involved in an environmental project (separate or as part of their studies), making a positive impact on their community.

US camera ownership dips, interchangeables up
In 2013, US digital camera ownership dropped to 68 percent from 71 percent of households in 2012, mostly as a result of a decline in point-and-shoot cameras, according to The NPD Group’s 2013 Household Penetration Study.

Even among those formerly snap-happy households with children under the age of 18, point-and-shoot cameras declined – possibly substituted with camphones? DSLR ownership withing this group showed no significant change.

The local industry regrettably doesn’t have these kinds of figures any more – the annual industry-funded survey was abandoned a couple of years ago as too expensive, with all available funds sunk into promoting the annual trade/consumer exhibition. 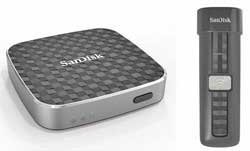 The USB stick gives users 32GB of extra storage for their devices without the need for an internet connection or cables. Users can simultaneously access photos, movies, music and documents on their drive from multiple devices around the house or on the go, with up to four hours of continuous streaming on a single charge.

The SanDisk Connect Wireless Media Drive offers up to eight continuous streaming hours on a single charge. It is available in capacities up to 64GB and has an SDHC/SDXC memory card slot which allows users to store or share more content, or conveniently view high-quality photos on a mobile device from a camera’s memory card. The media drive wirelessly connects up to eight mobile devices and can stream up to five different HD movies at once.

The SanDisk Connect line of products is compatible with iPhone, iPad, iPod touch, Kindle Fire and Android devices as well as PC and Mac computers. Movies, music, photos and documents can be loaded by simply dragging and dropping the files, and accessed via the SanDisk Connect apps available for download from the various app stores.

They will be rolled out first in the US and then later this year in Europe, with no release date for the local market.

US levels retail playing field
Online retailers in the US (with annual revenue of more than US$1 million) will be forced to collect sales tax on transactions across state lines, following the passing of the Marketplace Fairness Act.

Consumers are required, under existing state laws, to pay sales taxes on the goods they purchase but currently, online sellers simply are not required to collect the tax in the same way that local businesses do, putting them at the same kind of disadvantage Australian GST-collecting retailers are at against US online retailers.

While US legislators level the retail playing field from state to state, Australian legislators still haven’t moved to do the same between businesses owned by their own citizens and their global competitors.