A kiosk in the hand

One of the more wide-ranging and engaging sessions at the PMA Convention in September, slickly emmcee’d by Paul Atkins (Atkins Technicolour), was a panel discussion addressing ‘what’s working in output‘. 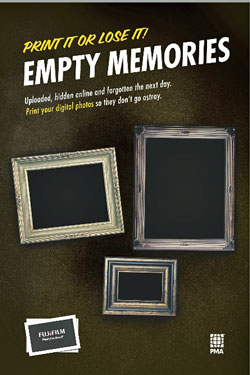 Paul Atkins commenced the session by observing that the days of strong marketing support from major companies were over, and businesses in the photo industry had to accept the fact that they needed more of a do-it-yourself approach these days.

‘We have to accept the fact that we are not going to be able to compete with the giants, and all we’ve got is ourselves and our staff.

‘Fujifilm has announced the “Print It Or Lose It” campaign here with PMA – and what a great partnership that is – but I don’t think we can rely on those wonderful people to give us that sort of help.’

Move smartly on smart phones
The discussion started on what to do about smartphones and their role as the new snapshooter cameras.

‘People are taking more photos than before,’ noted David Santer, regional director, Kodak Alaris. ‘We have the opportunity to do more with photos but people want things instantly. He said that ‘being in photo specialty I think it will become a lot harder, because people want things where they are at the time.

‘The ability of people to get what they want where they want is very important,’ he reiterated.

He noted that while Fujifilm had only just announced software which would enable printing from phones, ‘Kodak has had this to market now for nearly a year and a half’. Eight percent of people in Australia using the Kodak kiosks are already printing from their phones via Wi-Fi.

He went on to note that wirelessly connecting a smartphone to a kiosk was really only an interim solution – making a comparison with early digital minilabs which still developed and printed from film as well – and that eventually, ‘the kiosk can be in the hand’ in the form of the smartphone.

‘Over the next few months you will see that the kiosk we used to have, while it’s still very important for new products and services which are not simple – like very special books – the kiosk for most simple printing will soon be in the hand, and (customers) will be able to print wirelessly and have a print-out instantaneously.

‘How we offer the service has to be very different to what it is today. I think that’s going to be the challenge because we need to be everywhere to offer the service for everyone, because everyone has a phone and they are using it all the time.

‘The growth of smartphones is incredible – 40 percent year on year. We need to be there to offer what the consumers want, not try to deliver what they don’t want, but actually follow the trends and deliver what consumers want today. (This from the company which brought us Photo CD and Disc and Advantix cameras. How times have changed!)

He said that we have been ‘trying to force the market into certain books or other products’ that they weren’t interested in.

‘That market is growing but in countries where they have been smarter about it we are seeing that they are adapting much faster with new products and services.’

He rounded out his ‘kiosk in the hand’ riff by saying:’The phone is here. We need to utilise it and not just think it’s a capture device and we are losing the images.’ He conceded that not all images are going to be printed, but the potential was to encourage printing of those special moments which have always been made into photographs.

Phil Gresham, (Fotofast, Brisbane) explained how his new Dakis-based system for printing from smartphones worked; there is no app as such, as the software interfaces with the smartphone via the retailer’s website. See separate story and accompanying discussion.

‘For ordering prints it’s very iPhone and Android-happy,’ he said.

(The new Dakis smartphone solution will be rolled out to Camera House retailers at the AGM this weekend.).

‘We tried the Kodak kiosk, but unfortunately it only talks to Kodak printers,’ Mr Gresham noted. (Later in the session, Mr Santer said the latest Kodak software isn’t exclusively proprietary.)

Mr Gresham said that Dakis takes a small percentage of the sale but ‘in the big scheme of things it’s not going to cost me a lot of money at all to have a solution.’

For high-end operators Nulab and Momento the challenge wasn’t in offering an easier and more instant connection between the smartphone and the printing service, but getting the images off the phone in the first place.

‘We love the fact that people are taking so many pictures on iPhones,’ said Geoff Hunt managing director, Momento, ‘;But my fear of them is they are also a storage device and a sharing device. For creating photo books, he said, apps on a smartphone were ‘not so good’. Images needed to get from the smartphone onto a bigger screen.

Fujifilm’s representative on the panel, national sales manager, Michaela Lawrence, volunteered that, even though activity in the marketplace might contradict it, ‘market research that we have just conducted shows there is a very high intention of consumers to print.’

‘We know that they love photos and interestingly enough this is as true with the youth market as the oldies. The intention to print is there, it’s just about making it as easy as possible. So our new product, Transpix, which is able to print wirelessly from phone, will help.’

She also spoke about a new auto-build feature in the Fujifilm kiosk software which creates a simple photo book ‘on spec’ in the background while a customer is at the kiosk ordering their prints.

‘Even if they don’t like the book, it creates a conversation around the book and is a really good catalyst for that store to be able to offer to help make a book from scratch,’ she explained. ‘So even if book rejected it’s creating awareness around photo books.’

Industry doyen Rob Tolmie explained that he had recently returned from a European holiday with around 3500 image files, and his wife had been working on a photo book for about six weeks.

But, ‘we have collectively produced nothing. And I’ve been in industry for 50 years.’ This is a critical point – perhaps the real elephant in the room: It’s simply too hard, and too time-consuming. The man who more than anyone else in Australia has been responsible for making photo books readily available hadn’t been sufficiently motivated to create one himself from a European holiday (even though he can probably negotiate a great price and presumably knows his way around photo book making software.)

(Confession: I have only made a couple of photo books to date – and one of them was FOC. I wonder how many of us in the industry have a similar scorecard?)

However, Mr Tolmie had a solution. He spoke glowingly about a business in the US called Mixbook, which has an extremely simple book builder called Moasaic. This is an app for Iphone and Ipad which creates a 7×7-inch, 20-page book with a hard cover for $20.

‘You have zero options apart from selecting the photos. It’s $20 a book and that company is blowing its head off,’ he said.

He explained that Mixbook itself had a full range of photo book, greeting card and calendar offerings and that the separate Mosaic business served as a way of bringing people into the photo book market. He urged the audience to download the mosaic app, noting that most retailers could easily produce a similar one-photo-per-page, 20-page photo book in store.

Phil Gresham looked back nostalgically at a simpler, more profitable time in photo retailing: ‘I loved it in the ’90s when we were making so much profit you didn’t mind paying stupid prices for paper and all we had to ask the customer is “one or two,matte or gloss?”. It was so easy but now I’ve got 60 to 80 templates just for mugs…’

Mr Gresham was a pioneer of in-store photo services and an early fan of the Long Tail theory of marketing. Now he’s not so convinced.

‘We are reducing our lines,’ he said. ‘I read the Long Tail book and saw the presentation, and thought I had to have everything,’ he said, resulting in a lot of unwanted stock building up over the years. Now the focus was on creating unique templates in areas where there was a proven or emerging demand.

‘We are now adding a lot more unique templates we make ourselves,’ he said, including about 160 templates for Instagram or ‘square-friendly’ prints.

‘That’s where we are moving to and that’s where the future is. I don’t know what the next big thing is, but the fact that we do it and offer it is going to make us a lot more visible on the web.’

Rob Tolmie agreed that pursuing a Long tail strategy is ‘now probably not wise – just because of the stock levels you’ve got to carry.

‘As a retailer, make a decision about whether to outsource totally or partially, or do everything yourself as Phil does.

‘But if you do, identify some of these products that are the most popular and the most profitable’ and focus on a smaller but more in-demand product portfolio.

He said that metal was the wonder product at the moment and retailers should definitely look at the home decor market.

Geoff Hunt expressed some concern about the direct-to-consumer ambitions of the largest business in the photo industry, Canon, with its Photo Pico high-end retail photo book and enlargement business, which is linked to its Canon Store online retail camera store business. Canon has also announced an image storage business.

‘I look at Canon and I wonder where that’s going,’ he said. ‘You’ve got one company which has got dominance in the capture market and is now really investing in the output market. They will be able to have the thumbnails up on the cloud while you are still travelling. Then when you get back there’s already an auto-filled book in your email and that’s where you get the offer.

He said the appeal here was that customers don’t have to invest their all-important time into the equation, which was a big advantage for Canon.

– We will have to wait a while longer to find out ‘where that’s going’, as the Canon representative billed as part of the panel did not show up.